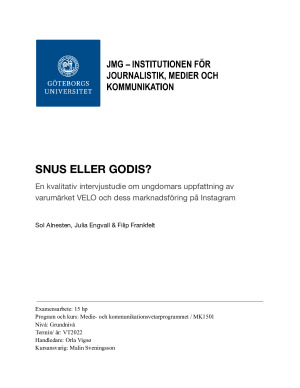 The purpose of this study is to examine how young people experience the marketing and brand of VELO, a tobacco-free snus company based in Sweden. This from an ethical perspective, but also how it correlates to their use of the plattform Instagram, VELO’s primary marketing platform, and the use of influencers to promote the white portions. In 2021, the sales of tobacco free nicotine portions increased 88%. Since the launch of nicotine pouches, the general use of nicotine has increased, not at least among young girls. For years, there has been research done on other addictive substances, such as tobacco products. Since the white portions have increased in
popularity in a short time, the research on white portions is limited. The primary focus of this study is therefore to examine how young consumers experience the marketing around VELO.

In order to do this, we have applied a qualitative method, conducting nine semi-structured
interviews with young adults aged 16-25. During the interviews, the respondents were asked
about their use of white portions, VELO as a company and the marketing of the white portions.
This led to discussions regarding the ethical perspective of influencers promoting addictive
substances. The respondents were also shown images taken from VELO’s Instagram and from
some of the influencers promoting the products on their Instagram page.

The results show that what is happening on Instagram affects the respondents’ attitudes towards snus. If an influencer promotes something as cool, it is common for others to develop the same attitudes. The fact that they also testify that they sometimes consume the products that influencers suggest supports that result. This means that what happens on Instagram in some way has a connection to the respondents’ attitudes. In addition, we found that the psychological needs met by using snus and using Instagram are similar, needs such as satisfaction, group affiliation, satiety dependence, time travel and more.

Most people considered that the wide range of flavors is unproblematic on a personal level and considered it positive to an extent, as they have more choices. On the other hand, it was considered more harmful on a societal level as there will be a lower threshold for young people to start using snus. Regarding the ethical aspect, there were differences in the opinions on whether VELO markets itself in an inappropriate way. The majority agreed that the marketing takes place towards an inappropriate target group. It became a question of definition where the respondents had different boundaries and opinions.