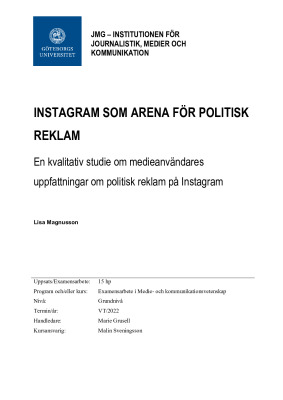 In today’s society, we see advertisement everywhere. Personal-targeted advertising has also grown larger because of the information-gathering of users’ personal data, in order to design advertising that will suit the individuals interests. Ahead of the upcoming election this autumn, political advertising has made rapid progress. Politicians want to reach out to their
young voters on Instagram and therefore, are buying advertising space there. However, there is not much research about what people actually think of political advertising, which leads up to the purpose of this study.

The younger generation grew up with social media and a lot of advertising. Earlier studies show that this younger generation also finds this “new” technology positive and find personalized advertising more appealing than the regular type of advertising. The purpose of the study was to investigate how female first-time voters experience the political advertising
that is seen on Instagram. It was also essential to get an insight into their awareness of how their personal data is processed and used. Are they aware that the advertising that they see is targeted directly at them? And how do they feel about politics and advertising being combined together on a platform you spend a lot of time on?

The results of the study show that targeted advertising is received positively among the interviewers, as they receive advertising that is in line with the individual’s own interests. What is considered uninteresting, they just scroll past. Even if the people do not reflect much on information-gathering, there is a feeling of being constantly monitored. The interest in politics is low, while the will to become more educated about it is strong