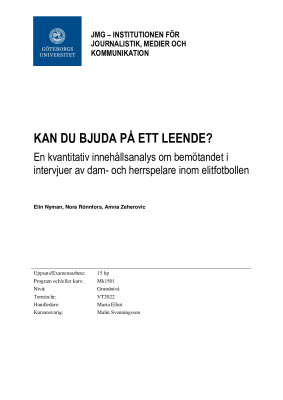 CAN YOU GIVE US A SMILE?
The purpose of this study is to examine if the communication differs between journalists and femaleand male professional football players during live-interview situations. Since the 1900s sports
journalism has grown into what we today consider a main subject in modern journalism (Dahlén, 2008:71-72). Although research shows that women are less likely to be associated in sports news (Schmidt, 2017). Also, according to Dahlén (2008) sports journalism is constructed by a structure of norms, thus one of them is that the content is created to attract a male audience. This also leads to why men tend to have a bigger place in sports media. Futheron this also contributes to a vicious circle thus the interest of women’s sports fades out of existence. According to FIFA (2021) media play a big part
in the development of women’s football. Therefore, we also consider that the media is an important contributor to the work of equality, both within the sport but also in society. The subject of interpersonal communication and sports journalism is rather unstudied. There is a lot of research on the exposure of women and male athletes in media but there’s still a lack of studies analyzing the content itself. Therefore, we wanted to examine live-interviews, as it is a big part of sports journalism.

This study is based on five different core questions that’s considered to be answering our main purpose of this research. Firstly, we seek to know how often relatives and/or partners are mentioned in the interview per say. Previous research shows that men dominate as the main characters in sports journalism. When a woman is exposed through sports media it’s often in relation to another, mostly male, family member (Bryant, 2014; Schmidt, 2017). We therefore found this question relevant to our
study. Secondly, we wanted to know how often the journalist comments on the players visual appearances, as in looks and mood. Based on the previous research we can identify a pattern of female athletes being portrayed in a more sexistic way than male athletes (Weiller-Ables, Everbach &
Colombo-Dougovito, 2018). We also found it relevant to question how often visual appearances weren mentioned in relation to the game itself, since previous studies had proven that women according to the norm are expected to communicate in a more emotional way compared to men. We once stated the fact that women get less media exposure than men, therefore we also found it suited to examine the number of interviews per game for male- and female athletes. The fourth question known in this study
is whether the journalist is being more critical to the male- or female player. We based this question on Brown & Levinson’s politeness theory (referenced in Jensen, 2015:180) and Lakoff’s dominance approach (referenced in Norrby & Håkansson, 2015: 124-126), and further association to previous
sayings from Kristiansson, a Swedish commentator, that have great experience within the industry (Fotboll och Damsamhälle, 2015). Lastly, we questioned if the journalist had a different tonality interviewing a male- or female athlete. By this we meant to be interested in factors like infantilizing
and derogatory comments or the general feeling of the interview itself. For instance, mentioning the player’s gender. This question also involved our interest to recognize if “obvious questions” are being asked, such as asking a player if they’re happy after winning a game.

Our hypothesis was based on the previous research mentioned above, in addition to the politeness theory, muted group theory, genderlect styles and the dominance approach. To summarize, our hypothesis stated that we would be able to identify differences in how the male and female athletes were treated. We thought that signs of the women being asked more personal questions aimed at family would be present, that they would get asked/comments about their visual appearances more often. Our hypothesis also stated that the overall climate concerning the interviews with women would be more gentle and less critical, but that the women probably would get interrupted and apologizemore often than the men. Concerning the question about media exposure, our hypothesis said that we would likely see less interviews per game for the women compared to the men.

This study is a quantitative content analysis and the material used are broadcasts of international games played by the Swedish national teams. The analyzed units are live-interviews chosen from selected international games, with Swedish male- and female professional football players. The
interviews have been broadcasted on one or more of the following channels: SVT, TV4, C MORE, TV12, TV6 & Viaplay, between the years of 2016 and present time (April 2022).

The main results of this study showed less differences between the genders than we expected. We couldn’t really find any strong statistical evidence suggesting that the journalists treat the players differently based on their gender during the interviews. There are occasional examples which stand
out, but they just aren’t enough to be of any statistical significance in this quantitative analysis. Overall, the genders seemed to be treated fairly equal, except for when it came to how many times they were being asked obvious questions. Our results showed that the female players were asked obvious questions in 20 percent of their interviews, while male players were asked these questions in 8 percent of theirs.

Our study also offered a few suggestions for future research. These suggestions contained research focused towards how journalists discuss injuries with the players, more qualitative approaches concerning how specific words are used during the interview, whether the gender of the journalist/the company the journalist works for plays a role in how the player is treated, and finally we suggested future research to focus a bit more on the commentary and discussion between the “experts” in the studio, (which is commonly also broadcasted before/after the interviews). During our analysis we got to hear short clips from these discussions, and they seemed to have a bit of a different communicative climate compared to the interviews.