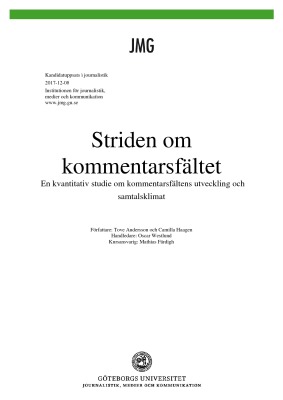 Abstract
The purpose of this study has been to investigate who writes what in a modern online commenting forum. In an ever changing digital world there are certain themes that reoccur in the public debate. One of those is the question about uncivility and impoliteness online. In Sweden alone our government has started an initiative to end threats and hate speech in the online world. This is in no way a problem that only materializes in the newsrooms, but it is a problem there as well. Online commenting forums have long been described as a culprit in this story. Theories about anonymousness and certain demographic traits playing a role in the uncivility debate have made its way all around the world, based on our research. So we wanted to ask ourselves – what is the online climate like in Sweden, by many described as an online haven for our rigorous laws protecting our freedom of speech and information?
In order to figure this out we decided to do a quantitative content analysis and investigate 900 comments posted in the commenting boards of the largest morning newspaper in Sweden Dagens Nyheter during October 3rd to November 12th. They hired a new startup company called Ifrågasätt which purpose is to sell their commenting forums to newspapers around the country, based on the idea that they will themselves clear the commenting boards of any uncivility and upsetting content.
Of the 900 comments we coded the majority of them were found to be polite. We found that men are the most likely to comment in these forums, and that the anonymous group was larger than the amount of women commenting. We also found that the most amount of comments were posted in the “Culture” section of the newspaper. A vast majority of the comments in total were also written towards the journalist or writer rather than the fellow commenters. We find that our study could in many ways be generalizable on other similar online commenting forums in order to investigate politeness in the online sphere.
Key words: online commenting forums, politeness online, anonymity online, Ifrågasätt,
Dagens Nyheter, newspapers online.