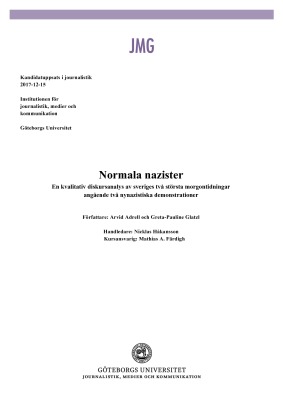 Abstract
In october 2017 the almost institutionalized Book fair in Gothenburg decided to let the right wing magazine “Nya Tider” participate and spread its message during the event. At the same time, neonazis planned a demonstration and as a result, a lot of the authors participating in the book fair signed a petition as a protest against the decision. There was a discussion about a “normalization” of right wing nationalist ideas for which both the organizers behind the book fair and the media got the blame.
This essay tries to reveal if there is a difference when it comes to position regarding neo-nazi ideas in the two biggest Swedish newspapers by comparing the reports about this event to a similar one that took place in Stockholm 20 years before. In 1997 a group of neo-nazis performed
a manifestation aiming to celebrate the anniversary of the november 1938 pogrome. It was the first openly anti semitic manifestation in Sweden since the second world war. We also wish to explore whether there are differences in the portrayal of neo-nazis, counter demonstrators and police and in the portrayal of the very ideology. By using critical discourse analysis (CDA) and
ideology criticism we seek to unveil both hidden and explicit positions taken regarding neo-nazis and their ideology.
We came to the conclusion that while opinion based texts such as chronicles took a strong stand against neo-nazism in both cases, the news reports, which normally aims to be objective and dispassionate, took a much heavier stand in 2017. The neo-nazis are described more as brutes and revoltic youth in 1997 while they are a more serious threat to democratic values in 2017 and looked upon with more austerity. Counter demonstrators are portrayed as brutes in much the same way as their counter-part in 1997 but as peaceful and democratic citizens in 2017. The police are described as clumsy and incompetent in 1997 and quite the opposite during the demonstration in
2017. The neo-nazi ideology is, as is the neo-nazis themselves, portrayed in a much more serious manner in 2017 and the latter event is allowed more space in the newspapers.
Keywords: neo-nazism, the NMR demonstration in Gothenburg, the celebration of the novermber pogrome, swedish daily press, ideology, standpoint, critical discourse analysis.
Nyckelord: nynazism, NMR-demonstrationen i Göteborg, firandet av kristallnatten, svensk dagspress, ideologi, ställningstagande, kritisk diskursanalys.