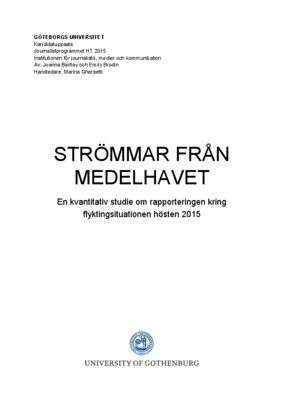 On September 2 2015 a three-year-old Syrian boy named Alan Kurdi was found dead on the beach in Bodrum, Turkey. Alan Kurdi is one of thousands refugees who have drowned while taking the dangerous boat ride over the Mediterranean Sea to escape terror and war in Syria. The shocking picture of his body became the starting point of massive media coverage of the refugee situation in Europe today. According to UNHCR, over 50 million people in the world are refugees today and about 900.000 of them have arrived in Europe by the Mediterranean Sea in 2015. In this Bachelor thesis we are examining the Swedish media portrayal of the refugee situation in Europe. By using a quantitative method and applying theories of newsworthiness and social identity, we have studied 490 articles from September 2015 in Sweden’s four largest newspapers: Dagens Nyheter, Svenska Dagbladet, Aftonbladet and Expressen. Our aim is to find out how the refugee is portrayed by looking at each person’s gender, age, name, title and position in the article. We want to find out if there is any stereotypical way of presenting the refugees. Furthermore, we want to know if the refugees get to define their own situation or if there are other actors such as politicians, organizations or journalists speaking above their head. Our results show that the newspapers are providing a rather chaotic picture of the refugee situation. Words such as catastrophe, crisis and stream are frequently used to reinforce the impression of turmoil. Forceful words like these can create negative associations amongst the readers and has the potential to influence their opinion about refugees. Refugees get to speak in approximately 60 percent of the articles, but they are rarely the most cited actor. Politicians and columnist are often speaking above their heads. Moreover, we have found a significant difference in the portrayal of men and women. Men are overrepresented in all of the categories in our study. This can partly be explained by the fact that there are more men than women amongst the refugees (according to UNHCR). Nevertheless, the female refugees that do occur in the articles are less likely to be presented with a professional title and less often occurs as the main actor.