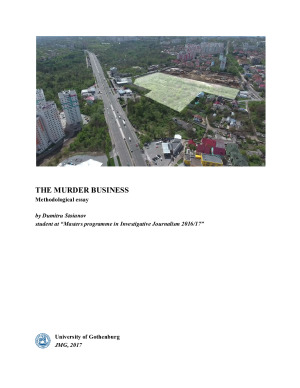 The subject of my investigation, called “The Murder Business”1, if defined in one word, is corruption. On one hand this corruption depicts the vulnerability of Moldovan legal system to
protect such fundamental rights (as defined by Moldovan Constitution) as private property and
right to life2. On the other hand, the investigation reveals a corrupted way of action those who
normally would be called the victims of the situation.
In fact the investigation tells two interconnected stories. One of them is about a scam organized
by a corrupt policeman who fraudulently deposed a private company of a million-dollar land using his professional position. The scam has been organized with the help of a homeless taxi-driver (who became a proxy owner of the land). The fraud failed and as a result, the policeman killed the taxi-driver in breakout region of Transnistria in order to get rid of all the evidences and tracks towards him.
Another story is about a German retailer Kaufland who indirectly announced its plans to build a
hypermarket on the above-mentioned land without having any legal rights to do so. Based on the
evidences that me and my colleagues succeeded to find, we demonstrated that Kaufland has been
in talks to build a store there for a long time. That happened in conditions when the actual land
owner has been and still is a dead taxi-driver.
The investigation is extremely relevant and actual for Moldova. Not only because Kaufland is about to land on Moldovan retail market3. And not because the scam has been totallyunderreporter in Moldova. This investigation shows exactly how everyone, would it be a police officer, a homeless taxi-driver or a big company coming from European Union – are using
corrupted environment in Moldova for their profit.