A POSSIBILITY, A THREAT, A DENIAL? 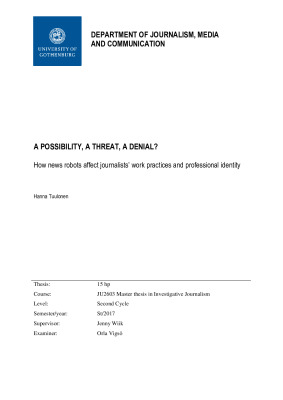 Aim:
The aim of the thesis is to gather an understanding on how news robots have influenced and will influence journalists’ work. This thesis also seeks to explain how journalists’ attitudes towards news robots have changed after they started working with or side by side with news robots, and how news robots affect journalists’ professional identity.
Theoretical framework:
The findings of this thesis will be compared and reflected in relation to previous research results and analysed in the context of professional identity theories. To understand how news robots affect journalists’ professional identity Mark Deuze’s and Henrik Örnebring’s theories, along with other relevant theories, on identity construction will be used as a framework to analyse the findings.
Methodology:
Qualitative study was determined as the most relevant way to gather the information needed. Semi-structured interview was chosen as a method since in-person interviews give the respondents the possibility to answer the questions in their own words without pre-given options. Designing and conducting the interviews follows Steinar Kvale’s theories on qualitative research.
Conclusions:
Journalists use the same working methods as before but, due to news robots, they shift their focus from repetitive tasks to interviews, on the field work and analyses. News robots give journalists more time to work on news stories that would otherwise been left undone. They also increase both the quantity and quality of news articles. Working with news robots has changed journalists’ attitudes from neutral and negative to positive. Based on the findings of this study and theories on professional identity, journalists’ professional