The Tailors, Merchants, and Consumers of Misinformation

Unearthing the Patterns of Misinformation in Bangladesh 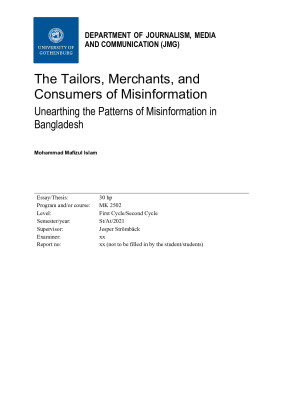 Misinformation has always existed, though research suggests that their prevalence has increased in recent years in different forms (post-truth and alternative facts, for instance). Experts claim that it is now a global phenomenon regardless of their financial condition or advanced technology. Given this, it is no surprise that media and communication scholars have devoted increasing attention to investigating questions such as who the creators of misinformation are, how misinformation is disseminated, why misinformation is created and propagated, and which media platforms are used to disseminate misinformation. However, the recent research about misinformation is focused mainly on the Western perspectives. We know a little from underdeveloped countries’ context, especially where the freedom of expression is in poor condition, the state of democracy follows a backsliding trend. One such country is Bangladesh. Against this background, this study investigates patterns of misinformation in both social and mainstream media in the country. Previous studies have been reviewed to understand the theoretical perspectives on misinformation, and theories such as motivated partisan reasoning, human decision-making process, online echo chambers, and filter bubbles have been applied. The study has been conducted mainly a descriptive analysis based on the fact check reports done by BD FactCheck during 2020. The study also investigated how people interact with political and non-political issues such as health and medicare, law, crime, and education. The results suggest that the politicians, both mainstream and social media are the active actors in disseminating misinformation. Also, there is significant amount of misinformation related to political issues.