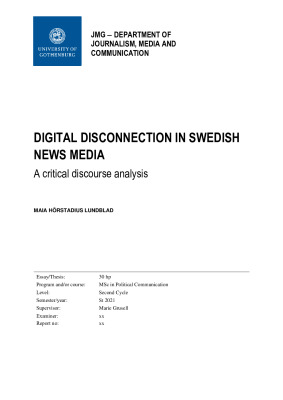 The use of new information- and communication technologies, and social media platforms in particular, has rapidly increased from 2010-2012, when social media ‘boomed’ in Sweden. Thereafter, these platforms have become integrated in all aspects of everyday life – in the social as well as the functional, e.g. communicating with friends or performing tasks at work. Yet, some people choose not to participate in the online community, for various reasons (political standpoints, life-style choices, et cetera). These are, in this thesis, referred to as ‘digital disconnecters’. Previous research on digital disconnection has mostly dealt with motivations to disconnect, or the consequences of disconnecting (e.g. health implications or social implications), but it is a rather small field as of today, and not much research has dealt with the discourse surrounding disconnection, in contrary to ‘constant connection’. The purpose of this thesis is to examine media representations of digital disconnection, as portrayed in Swedish legacy news media (Dagens Nyheter, Svenska Dagbladet, Aftonbladet and Expressen), and furthermore to describe how digital disconnection is ‘talked and written about’ in Sweden during 2010-2012, when social media boomed, and 2018-2020, when social media platforms – and Facebook in particular – have received a fair amount of criticism from experts and Silicon Valley ‘insiders’. The theories used to explain the results are ‘media representations’, ‘media discourse’ and ‘political consumerism’, and a critical discourse analysis has been undertaken to examine and describe the phenomenon. The study moreover showed that digital disconnection is mostly represented as healthy and authentic, while constant connection is represented as harmful (to relationships and one’s mental health) and addictive. Those who disconnect are framed as ‘enlightened’ and firm in their values, e.g. by boycotting Facebook for political reasons. However, no clear difference could be seen between the two time periods (2010-2012 and 2018-2020).