A study of the Swedish Public Health Agency’s crisis, - and reputation management during the COVID-19 pandemic 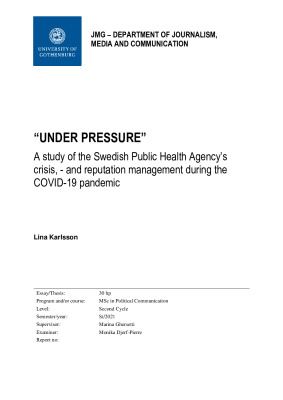 This study examines the Swedish Public Health Agency’s (PHA) crisis communication regarding the COVID-19 pandemic during the year of 2020. Departing from a synthesis of the frameworks of Image Repair Theory and Bureaucratic Reputation Theory, the PHA’s online press conferences are critically analyzed to map out how the PHA’s representatives react to reputational threats that occur alongside and in connection to its management of the crisis at hand. With reputational threats is meant allegations or incidents that risk shedding a negative light on the organization in question. The aim is to explore the applicability of said frameworks in a new empirical, crisis communicative context, but also to contribute to the understanding of what role reputational concerns play in public organizations’ crisis communication; an aspect that I argue has been overlooked in the crisis communication-literature. Departing from a definition of reputational threats as either criticism (where the PHA have been publicly questioned or criticized) or acts of reversal (where something seemingly changes in the PHA’s approach), five situations and six corresponding press conferences are selected for examination. A rhetorical analysis based on the logic of accusation (kategoria) and defense (apologia) finds several instances of what can be classified as verbal defense-strategies in the PHA’s crisis communication, but also interesting variations depending on what the threat is about or where it comes from. The PHA’s only constant reaction across press conferences is found to be initial silence: to wait until the issue at hand is brought up by someone else (in this case, a journalist participating at the press conference). The insights of this study pose challenges to current scholarly understandings of crisis communication within the public sector and showcase opportunities for future studies of the same.