WHAT TRIGGERS NEGATIVITY IN CANDIDATES’ CAMPAIGNS?

Examining the importance of personal characteristics, the role of the media, and the election context 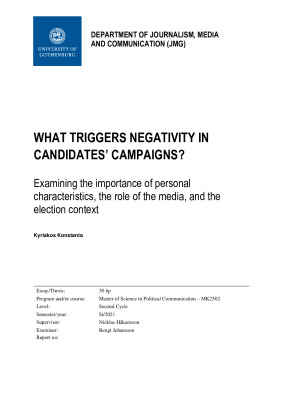 Research in negative campaigning is growing throughout the years, however, the focus by researchers has been put into negativity’s effects. The present study seeks to address the research void detected in the negative campaigning’s drivers. Using data deriving from a world-wide scale based on more than 1000 experts’ evaluations on more than 300 candidates’ political campaigns, aims on providing answers regarding the reasons political actors go negative while campaigning. The analyses provided have examined how the personality of the candidates matters in the degree of negativity in their campaigns, how the media affect that degree, and which is the role of the dynamics taking place in a broader election context.
The definition of negative campaigning is a difficult task that the academia has been facing and there is an abundance of definitions being used among the literature. In overall, negative campaigning refers to any form of campaigning that attacks a political actor’s opponent, that arises fear, or cynical news. There are many factors affecting the decision of any candidate to go negative. The most prominent ones found in the relevant literature refer to strategic choices, the candidates themselves, or the dynamics being caused by the media.
The present study used data from the Negative Campaigning Comparative Expert Survey Dataset – NEGex which is directed by Alessandro Nai. It is the first large-scale comparative study providing systematic data on the use of negative campaigning on a world-wide scale. The cases included in the study refer to 157 candidates who competed in 64 elections from 56 different countries and have been evaluated by a total of 625 experts. The analysis consists of regression analyses aiming on the estimation of the effect of the candidates’ personality characteristics, the media and the general election context on the degree of negativity in their campaigns.
Results show that the candidates’ personality indeed matters in the degree of negativity that their campaigns have. Candidates holding socially preferable traits are less likely to employ a negative tone, unleash character attacks, or use fear appeals as a part of their campaign. On the other hand, when media is focusing on the sensational aspect of the news and pay attention to negativity, the degree of negativity in the candidates’ campaigns increases. In addition, more competitive elections are causing more negative campaigns. However, another finding of the present study is that the three components of negative campaigning (tone negativity, fear appeals, character attacks) have different predictors, and that