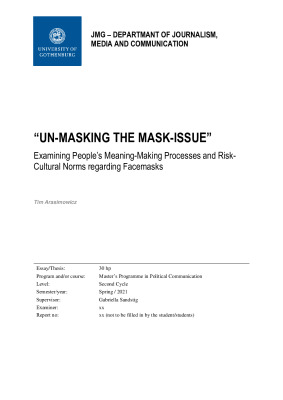 While most of the world quickly came to terms with covering their noses and mouths in crowded places, people in Sweden have mostly gone without, riding buses and metros, shopping for groceries, and going to school maskless, with only a few rare souls have covered up (Novus, 2021). Officials from the Swedish Public Health Authority (PHA) have repeatedly argued that masks are not effective enough at limiting the spread of the virus to warrant mass use, insisting it is more important to respect social distancing and handwashing recommendations. The current field of sensemaking research related to crises has often left out that the fact that meaning-making is a process embedded in the context of individuals’ social lives (Sandberg & Tsoukas, 2015). Previous research on risk and crisis communication has shown that different social, political, cultural, and economic conditions have created different risk cultures in which expectations about the responsibilities of society and individuals vary when a crisis occurs (Corina et al., 2016).
By revisiting core assumptions related to Sensemaking and Risk Cultural perspectives, the purpose of this thesis was to analyse how people, depending on their ethnic background and citizenship, have made sense of facemasks amid the COVID-19 pandemic. In essence, this thesis addressed people’s collective experiences, expectations, and attitudes to the broader meanings of facemask wearing beyond (just) preventing the spread of infection. This present thesis applied a social constructionist interpretive approach and used qualitative semi-structured focus group interviews to collect empirical material. The respondents were recruited using convenience sampling and were categorized into three groups based on (a) being born in Sweden with Swedish-born parents, (b) being born in Sweden or abroad with foreign-born parents, and (c) being born abroad, residing in Sweden, and holding citizenship other than Swedish. In total, five semi-structured focus group interviews were conducted, involving altogether 29 respondents.
The main results of this present thesis found that personal practices of wearing (or not wearing) facemasks are influenced by (1) the initial responses of the respondents first noticing’s of facemasks in ”in the outside world,” (2) the extent to which the respondents relied on information on masks provided from public authorities, (3) meaning-making outcomes of public spaces, and on perceived notions of social responsibilities and, and peer pressure, and (4) different kinds of risk-cultural norm and values.
Based on the previous research on risk cultures and Corina et al.’s (2016) typology, the empirical material distinguished two risk cultural divisions among the respondents. The first risk culture found, which was especially prominent among the respondents with foreign backgrounds (b) and citizenship in other countries (c), was the state-oriented risk culture. The second risk culture, most prominent among respondents with Swedish background (a), was characterized as a convergence between state-oriented and individualistic risk cultures. The dividing line between the two risk cultures was, i.e., the state-oriented risk culture and the ”state-individualistic” risk culture, the cultural anticipations and responsibilities directed towards the Swedish authorities. More concretely, the state-oriented risk culture demanded that the state, by almost all means, should protect its citizens from hazardous situations and risks. However, it may involve certain limitations of individual freedoms and rights. On the other hand, the state-individualistic risk culture argued that the state is responsible for leading, mitigating crises, and providing survival capabilities but should simultaneously also maintain/guarantee certain individual rights and freedoms. These empirical findings raise questions on whether Sweden theoretically should remain classified as state-oriented risk culture, an issue which future research should address more deeply.