Information Operations & The Rising Threat in the Cyber Domain 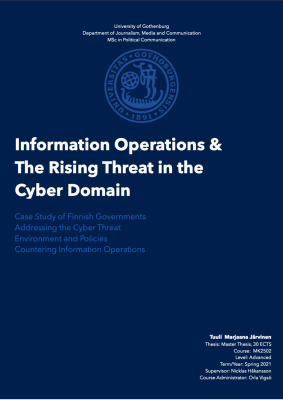 This research was inspired by two courageous Finnish women, journalist Jessikka Aro and PhD Saara Jantunen, who shined a light on Russian hostile behaviour on the Internet and started discussions about information operations nationally and
internationally all over the world. Due to personally becoming a target of aggressive
information campaigns, Jessikka Aro had to move abroad from her home as the Finnish Security and Intelligence Service suggested there is nothing to be done to counter the attacks or safeguard her from getting harassed online and ”offline”.
The following paper will take a closer look on Finland and its governmental work towards making the cyber domain securer and safeguarding Finnish society from the potential threat looming in the Internet and social media platforms. Information
operations in the cyber domain are gaining saliency in the national security conversations. The governments and other actors in the civil society are rushing to find policies which would mitigate the harm information operations are causing in elections, healthy public debates and widely in the democracy as we know it. Finland is known for its technologically savvy industries and the society is highly dependent on technological solutions in all aspects of the nation to work efficiently. The Finnish society, including the political leaders, are broadly integrated in social media and therefore potential subjects of information operations.
The thesis argues, that the obstructions in the cyber domain and information operations have caused security environment to expand from the traditional considerations of the securitisation of military and the state. Rather, the cyber security has expanded similarly like other global issues in multiple fronts: climate change, migration, polarisation and
trade. Cyber space offers a domain for the whole global world, where there are basically no boundaries, no governments, no norms of behaviour and in addition, no need for exposing users own identity. The case study of Finland will analyse six governmental texts from the Ministry of the Interior and Ministry for Foreign Affairs from the time period of 2012 and 2020. The years chosen are argued to reflect a change in the Finnish threat environment and policies which have potentially stemmed from the Crimean annexation in 2014. In 2014, Finland and other European countries saw how different hybrid tactics, including information operations, can lead to military conflict which still to this day in 2021, is present in Eastern Ukraine.
The thesis is exploratory in its nature, due to the lack of previous studies which explore the Finnish security environment and policies regarding information operations. The results are argued to reflect and predict a wider change in the international considerations of the threats in the cyber environment and a bigger wave of policies
which are meant to tackle and counter information operations globally. Finland has been considered as a front runner in technology as well as in cyber security matters, which indicates that Finland could be one of the countries driving the change and
demand more governing in the cyber environment. Finland poses an interesting case to study, since it might be one of the countries initiating broader scales of international norms in cyber space and policies for the future regarding cyber environment, ICT, artificial intelligence, data security and beyond.