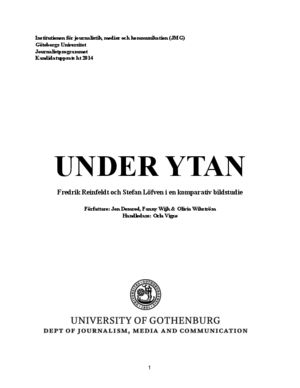 Title: Under the surface – Fredrik Reinfeldt and Stefan Löfven in a comparative photo study Authors: Jon Demred, Fanny Wijk & Olivia Wikström Level: Bachelor of Journalism Location: University of Gothenburg Language: Swedish Number of pages: 39 This thesis compares how Stefan Löfven was being portrayed in Swedish media the week after the general election 2014 with how Fredrik Reinfeldt was portrayed in the first week after 2006’s general election. There has been made a lot of research on how politicians are portrayed in the media, but most of the research focus on text portrayal. This thesis focus on something different, it compares how the two “winners” were portrayed in news photos. A semiotic approach was used to analyse news images in the newspapers Aftonbladet, Expressen, Svenska Dagbladet and Dagens Nyheter. It was important to not only look at the pictures, but also the outer context, i.e the headlines, had to be analysed to come to any conclusions. Fredrik Reinfeldt was portrayed more positive and more as a winner than Stefan Löfven was. This was probably due to the different political situations between the elections. The portrayals, however, had not much to do with the photos themselves, rather the headlines. The analysis shows that the emotions both “winners” expressed in the photos were quite similar. The main difference between how they were portrayed laid not in the pictures but in the outer context. The final conclusion is that even though pictures take up a lot of space in newspapers, they still are subordinate to text.