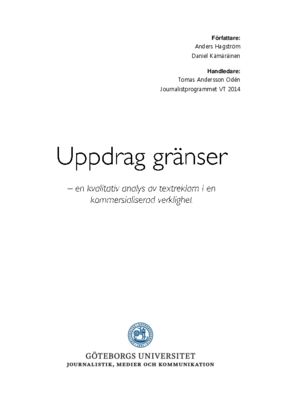 This study was made with the incentive to find out the view on advertorials in Swedish press today. Our exploration of advertorials refers not only to adverts that look like editorial texts, as per the definition in the oxford dictionaries, but also to ways that editorial texts use an advertorial style or language similar to adverts. We explored both these sides because we recognized that the existence of advertorials in press today has to do with material which is indistinctive in several ways, and to find out the views on this, we interviewed chief editors and publishers on six local daily newspapers in Västra Götaland, Sweden. Our theories were based in the fact that the press finds itself working in a commercialized landscape, at the same time as journalism has a democratic role to uphold in society. We also considered that there used to be a committee against advertorials in Sweden called Textreklamkommittén, which was disbanded in 2005. That committee had a mandate to govern and try cases of advertorials in the press, but today, the only thing that journalists have to consider is a guideline of publishing matters. The central part of our study was therefore to find out what actual issues journalists have to consider in their daily work, as they are exposed to various forms of advertorials. After conducting the interviews, we asked four analytical questions to our material using the ECA-method of analysis. Those four questions were: What is viewed as advertorials today? In what ways can advertorials be an issue? Are advertorials an issue today? What has brought on the view with which advertorials are looked on today? What we found was that there seems to be a consensus amongst the journalists that we interviewed regarding what is considered to be advertorials. But despite this, they all differ in the ways that they work with and interpret the material. There is a difference in how the journalists work with advertorials given their economic situation, which is seen in relation to small and big newspapers. At the same time, they all realize that the presence of advertorials can threaten the credibility of the journalistic content. But despite this, there is a general belief between them, that a committee against advertorials no longer is needed.