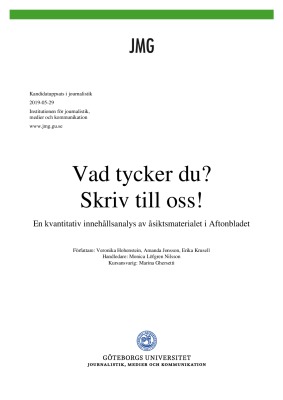 The purpose of this study is to investigate whether the seemingly increase in public debate over the past two decades has affected the amount of opinion pieces in the paper edition of Aftonbladet.

We have chosen to use a quantitative content analysis to conduct this study. The empirical evidence of this study consists of 84 paper editions of Aftonbladet equally spread over the years 1997 to 2017. We used theories of digitisation, commercialisation, public orientation and agenda setting to be able to understand the results of our study.

The main results of this study shows that the amount of opinion pieces in the paper edition of Aftonbladet has decreased with more that 40 percent over the past twenty years, which can be explained due to the decrease of the text genre “letter to the editor”. The results also shows that the most common subject for the opinion pieces is political criticism. It was also the most common subject each year.

As for the writers of opinion pieces it was shown that nearly half of the writers were male, yet only a quarter were female. The remaining quarter was made up by the writers that could not be defined as neither sex. The most common type of writer was the private individual, most likely due to the great amount of letters to the editor. However this changed over time. As the letters to the editor decreased, the paid writers, such as journalist and columnists, increased, and during the past ten years becoming the most common type of writer.