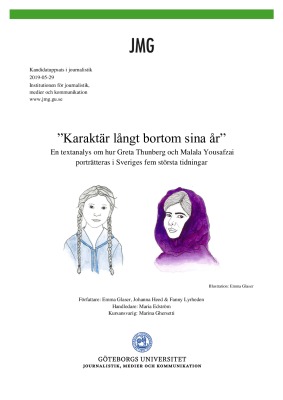 The aim of this analysis has been to investigate how Greta Thunberg and Malala Yousafzai are portrayed in news articles in five of Sweden’s largest newspapers: Aftonbladet, Dagens Nyheter, Expressen, Göteborgs-Posten and Svenska Dagbladet. First, 55 articles were analyzed with a content analysis. Out of the 55 articles, 8 articles were selected based on meticulously discussed criteria and a text analysis of these 8 articles was carried out.

The 55 articles were selected with help from a list of criteria, where 38 of these articles are about Greta Thunberg and 17 of them are about Malala Yousafzai. The articles about Greta Thunberg were published during the period February to April 2019, and the articles about Malala Yousafzai were published during the period of October to December 2014. The time periods were chosen based on the fact that these months were the months both of them had been published the most so far in Swedish news media. Theories about gender, representation and framing have been used to guide the study and analyze its results.

The qualitative result showed us that Greta Thunberg and Malala Yousafzai doesn’t have a lot in common with the theory about how women or young people are portrayed within the media. The articles write about them in a positive character. The media’s fascination with these young activists can be directly connected to them as a unique phenomenon, rather than how typical female adolescents are portrayed.