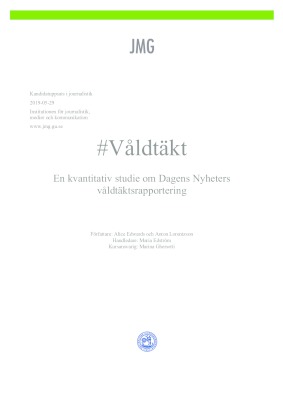 This study is a continuation of a well-known study, “Riktig våldtäkt”, published by the ethnologist David Sandberg in 2003. Sandberg made a content quantitative analysis of the reporting of rape by the largest Swedish newspaper, Dagens Nyheter, during the years 2001- 2002.

Sandberg found that the majority of Dagens Nyheter’s articles on rape were reports on assault rape, committed by unknown perpetrator(s), in public space. Contradictory to the news articles, the official crime statistics from the same time period, showed that the majority of rapes were domestic and by a perpetrator known by the victim. Sandberg concluded that media had a powerful role in shaping public opinion when it used sensationalism as criteria for choosing what to report.

Due to this power of media to shape and maintain public opinion, we found it interesting to investigate if Sandberg’s result would hold true to the reporting on rape taking place, by the same newspaper, during the years 2017-2018.

To be able to compare our result with Sandberg’s, we used the same principles for the selection of articles and the same criteria for our analysis as he did.

Our theoretical framework consisted of a social constructivist perspective. We also use the agenda theory, the news value theory, journalism ethics and gender theory (rape is a display of violence and power, not sexual lust).

Sandberg’s conclusion that Dagens Nyheter had a sensationalist focus on assault rape, changed in 2017 and kept up all of 2018. The articles dealing with domestic rape by a known perpetrator, which better mirrors the factual crime statistics, got more frequent, side by side with the overwhelmingly voluminous reporting concerning the two famous men, misusing their power to commit and get away with rape.

Social media has also opened up a new arena both for perpetrators and victims. It can be used with both good and bad intentions. Filmed rape can, by the offender(s), travel the web making the rape seemingly endless for the victim. But it can also be a powerful tool in putting the issue of rape and sexual harassment high on the public agenda. The #Metoo-movement lead to some sensational news of famous culture and tv-personalities, which ended up in court.