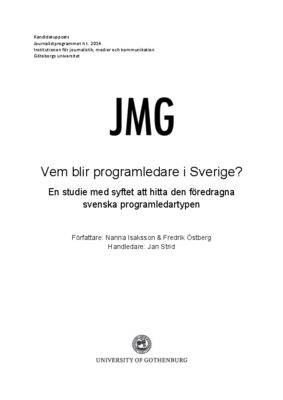 Authors: Nanna Isaksson and Fredrik Östberg Title: Who is the typical TV-host on Swedish television? Level: Bachelor of Journalism Location: University of Gothenburg Language: Swedish Number of pages: 57 TV-hosts have a pivotal role in television. They are the link between the content of the show and its viewers. We didn’t find any relevant studies about TV-hosts in Sweden and decided to carry out a study that would tell us more about them as a group. The purpose with this study was to find the answer to the question: Who becomes a TV-host in Sweden today? By looking at the current TV-hosts through the eyes of a viewer we set out to try to construct the preferred Swedish TV-host. We used a quantitative content analysis on all the hosts on Swedish productions that aired during the month of November 2014. We did not include the regular news shows in our study, because we consider the role of a news anchor to be a field of its own and very different to the role of a TV-host. We used three main aspects for our analysis: gender, age and ethnic background that we applied on all the hosts, but we did this from a viewer’s perspective. We asked ourselves the question: How does this person appear to us as viewers? And then we categorized them through our aspects. TV is a visual medium, and whether you like to admit it or not you’re constantly judging TV-hosts and feel the need to voice your opinion on their performance. We used this method because we wanted to get to the core of what a TV-host is. If you analyze them through a viewer’s perspective you see what the people at the channels that appointed them as hosts want you to see. All in all we analyzed 112 TV-hosts. Some of the hosts in our study appeared more than once, because they were hosting more than one show that aired during the duration of our study. What we looked at was not the number of hosts but the number of roles as TV-hosts within the shows that was included in our study. What was important was to see what kind of person featured as a host, not who. We found out a lot. First of all almost half of the roles as host were occupied by people within the age group 40-49 years old. Female hosts were more common than male (53 percent) and only six percent of roles as host were somebody with a non- Scandinavian ethnic background. As we dived deeper into our numbers we looked at different genres. We found out that women are preferred as hosts in shows that were in the field of Society and facts (66 percent) whereas men were preferred in shows that were in the biggest of our genres, the field of Entertainment, leisure and culture. We looked at the hosts that featured during prime-time, which in Sweden occurs between 8pm and 10pm. In the shows that were broadcasted during prime-time male hosts (53 percent) were preferred to female hosts. We were getting closer to answering our main question. Both younger – 29 years or younger (two percent of the total amount of hosts) – and older hosts – 60 years old or older (four percent) – were marginalized in our study. They didn’t feature at all in certain areas. We could however conclude that young hosts tend to do shows that cater to young people and older hosts tend to do the same towards older people. What was the answer to our main question then? We concluded that the preferred Swedish TV-host is a male whose ethnic background is Scandinavian and is between 40-49 years old. This was largely down to the fact that men tended to be hosting the shows that had the highest ratings (the ones that were broadcasted during primetime) and that they occupied the majority of roles as host within Entertainment, leisure and culture – which was the largest genre of our study.