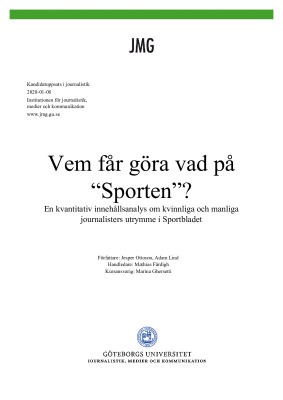 The purpose of this study was to investigate the representation in physical space of female sportswriters over a period of five years in the printed sports supplement of the Swedish newspaper Aftonbladet. We also investigated if women tend to write more about women and if men tend to write more about men. Add to that if there were any sports that women or men tended to cover more than the other gender. And if there was any changes to this over the period of five years. To achieve this, a content analysis were made on 30 newspapers from the years 2014 and 2019.

The theories we used to analyze: homosocial reproduction, Melin-Higgins theories about survival at a newsdesk, the logic of gender with Hirdmans theories of the system of gender, van Zoonens theories about gender, the selection of news and the commercialization of the sport pages.

The results showed there were a connection between the gender of the journalist and the gender of the athlete. In 2014, 14% of the articles women wrote in Sportbladet were about a female athlete/team. But in 2019 that number was 41%. This shows that there is more articles about women in sports and more likely for women to write about that. There were also an higher percentage of articles by women in 2019 than 2014. The physical space for women was less, but the articles tend to be more on the pages that were in the beginning of the newspaper in 2019 when compared to 2014.