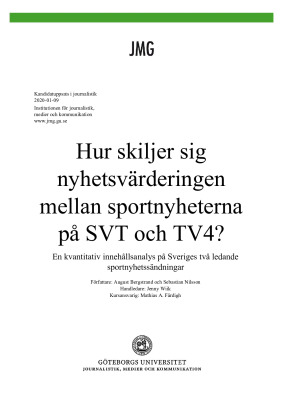 Aim of thesis:​ The aim of this study is to contribute to a better understanding of the differences between Swedish public service and commercial news media, within sports. The two units used in the analysis are the leading Swedish sport news programs Sportnytt (public service) and TV4-Sporten (commercial).

Theoretical framework:​ Sports journalism is something that is usually overlooked in academic studies as its often perceived to be less important than other areas of research. However, sport is something that has a big impact on society and plays an important role in a lot of people’s lives. The starting point of this study is that Sportnytt that is financed through tax money has a broader range of sports in their program when compared to the commercial TV4-Sporten. How the news evaluation and selection differ between the two programs and what possible reasons there are behind the evaluation in the respective programs are key questions within this study. Due to the traditional overrepresentation of men within sports, this study will also cover an equality perspective by conducting research on the frequency with which men and women appear on Sportnytt and TV4-sporten, respectively.

Methods:​ The chosen method for this study is a quantitative content analysis. The analysis is done with 13 different variables. Both news outlets broadcast their sport programs every day, Sportnytt 15 minutes and TV4-Sporten 10 minutes. Almost every broadcast on Mondays 2018 were analysed for this study.

Results:​ The results of the research correlated with our hypothesis. Sportnytt as a public service company did have a broader coverage of different sports, as well as a more equal coverage between male and female sports. The equality of those who were interviewed and shown in the programs were also more even on Sportnytt, compared to TV4-sporten. TV4-sporten on the other hand had a more equal percentage of male and females in the editorial staff, namely reporters and hosts. However, fundamentally the two program’s are arguably quite similar, with both showing mostly the same mainstream sports and events.