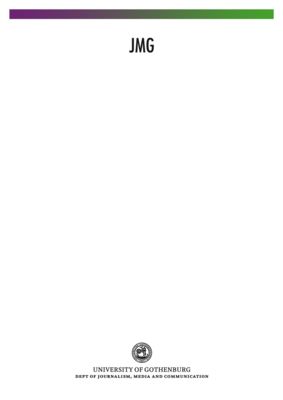 In this study we have explored how the refugee situation in the late summer and early autumn of 2015 has been reported in Swedish newspapers. This has been done by using the qualitative textual analysis Ethnographic content analysis, ECA. Our theoretical points of departure are framing theories, stereotyping and discursive discrimination. We have investigated if, and if so: what way, the media discourse changed after the pictures of the drowned syrian boy Alan Kurdi went viral. To do so, we compared the reporting between Swedens four biggest newspapers during four days before the pictures were published and four days after, 30/8-7/9. To be able to analyze the journalistic texts, we found our material to contain six different themes: commitment, humanity, refuge, analysis, the conflict between for and against accepting refugees and the impact of the picture.
We found that the reporting after the problem with the refugee situation was more often definded as integration. Also the publication was more often based on individuals instead of groups. The refugee wasn´t as often a number and a group of people, but could also be a specific person with it´s own story and words. One of those individuals were Alan Kurdi, and the picture of him also gave our material a new theme – the impact of the picture. The picture was mentioned as important and as one that would change the opinion among the public and the politicians, and therefore change the course of the crisis. After the picture was published, the journalistists also, to a greater extent, called on the politicians and the public for help and to open their hearts to the refugees.
Nyckelord: Flyktingsituation, flyktingkris, flykting, media, ECA-metoden