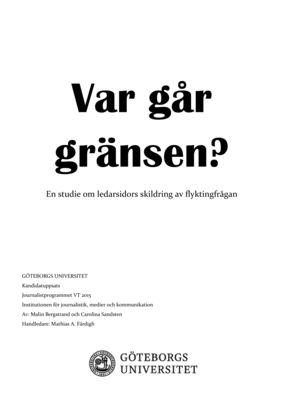 This study wants to find out how the image of the refugee issue is percieved by studying swedish newspapers editorial. The recent year, discussion about immigration and refugees has been a leading subject in swedish media, because of the many refugees who seeked shelter in Europe. Discussion about how editorials have debated matters surrounding the refugee issue has also been on the agenda. As we often refer to media as the fourth estate, it is important to scrutinize those who beholds an important position in our democratic society.
The study has been executed by using the qualitative textual analysis model ECA (Ethnographic Content Analysis). We have chosen the five biggest newspapers in Sweden with editorial material for our study, which are: Aftonbladet, Dagens Nyheter, Expressen, Göteborgs-Posten and Svenska Dagbladet. We startad off by reading all main editorials written during autumn 2015 to january the following year, to clarify how many editorials that had the refugee issue as main subject. We then chosed three topics for qualitative analysis using aspects of hegemony and the agenda setting theory.
The results after analyzing showed that the image portrayed in editorial was a country in system collapse, an image where the refugees is a contributing factor to why institutions in Sweden are in crisis. The refugee issue is often referred to from a political point of view. The image of the refugee is someone who is not blameworthy for acting wrong, it is rather the external factors, such as swedish migration policies, that are causing the misbehavior. The image given, when writers describe the refugee issue debate, a polarization between two sides emerges. One side condemns those who speak of refugees, and is against directing critisism at the different aspects of the refugee issue. On the other side are those who use acts of terror to create stereotypes of immigrants and refugees as terrorists and jihadists.
Key words: ledare, flyktingfrågan, flyktingar, debatt, immigration, systemkollaps, editorial, the refugee issue, system collapse, debate, migration, refugee