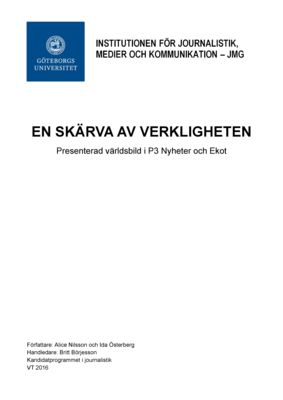 Authors: Alice Nilsson & Ida Österberg
Title: A fragment of reality – The view of the world presented in P3 Nyheter and Ekot
Language: Swedish
Level: Bachelor of Journalism
Location: University of Gothenburg
Number of pages: 43
The world presented through media cannot be a replica of the reality. Before the news reaches the audience, it has been evaluated and processed through various people and newsrooms.
Journalists have a significant power in influencing the audience’s view of the world, since research shows that media can affect the audience regarding which topics that are worth discussing. P3 Nyheter and Ekot are two public service-based news programs, reaching the whole nation of Sweden. P3 Nyheter’s targeted audience is people between 20-34 years of age, meanwhile there is no specific targeted audience for Ekot.
The purpose of the study is to investigate the view of the world presented by P3 Nyheter and Ekot. The raised questions investigate the content of the programs regarding main subject
area, actors and scene. How do the selected news programs evaluate the news, in terms of disposition and time? And what similarities and differences are there, in relation to previous
questions, between the selected news programs?
The material consists of news from 20 broadcasts, from each news program. The method used in the study is a quantitative content analysis and the results are presented in percent of total
air time. The results show that the view of the world, supplied through the news, differs. P3 Nyheter covers a geographically larger area of the world, at the same time as three quarters of
the news has Sweden as scene. P3 Nyheter includes a small amount of news topics concerning young people, such as education and unemployment. The news is short and the pace is quick.
Ekot on the other hand, has less news in total and 50 percent of the news has Sweden as scene. Ekot spends more time than P3 Nyheter on foreign news, but almost exclusively on news from countries which are geographically and culturally close to Sweden.
Our conclusions are that Ekot allows a deeper analysis in the news, while P3 Nyheter’s view of the world expands since it covers the world to a greater extent.
Keywords: view of the world, subject area, actor, scene, P3 Nyheter, Ekot, quantative content analysis, public service.
Nyckelord: världsbild, ämnesområde, aktör, skådeplats, P3 Nyheter, Ekot, kvantitativ innehållsanalys, public service.