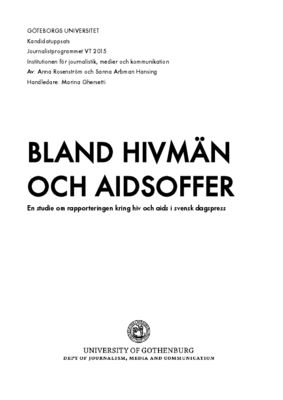 This study examines how the Swedish newspapers Dagens Nyheter and Aftonbladet report about hiv and aids. We start our analysis in the summer of 1987 when the famous designer Sigshten Herrgård reveals that he is hiv-infected, which causes a massive press coverage. To see how the reporting changes over time we compare the articles from that summer with how the epidemic was covered by the press in 1997 and 2007. Totally we have studied 355 articles. We chose the theme partly because of Torka aldrig tårar utan handskar (2012), a Swedish tv-serie about the lives and deaths of young homosexuals in Stockholm in the 80’s. It is based on a book serie written by the author and playwright Jonas Gardell who is critical to how media covered hiv and aids when it first came to Sweden. According to him the reporting was alarming and he refers to an article that described hiv as a punishment for people with an immoral lifestyle – homosexuals, prostitutes and drug addicts. We wanted to see if this really was what the reporting was like in the 80’s and what have changed since then. Our results shows that Dagens Nyheter and Aftonbladet often mention homosexuals, drug addicts and prostitutes in the reporting about hiv and aids. It is most common in 1987 but risky groups can be found in some of the articles from 1997 and 2007 as well. We can also see that the hiv-infected people very seldom get to express their view about the issue, instead it is experts, organizations and authorities that are the main actors as subjects in the reporting. We can determine that journalists often use words with a negative value in the articles about hiv and aids, such as promiscuous, non-human and reckless attitude. There has been an increasing amount of people getting hiv in Sweden, while the amount of articles in Dagens Nyheter and Aftonbladet have decreased.