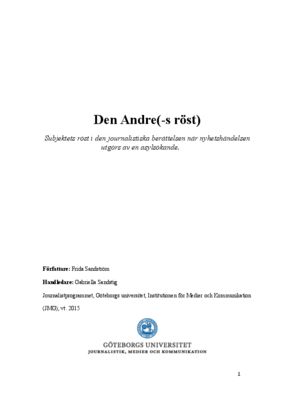 Background: Previous studies in media and law make visible that the asylum seeker or the conceptual immigrant is being mediated as a stereotype. Whether or how the words of the conceptual immigrant are mediated to the media consumer has not been investigated further, though. Therefore, this study analyses 25 articles published in the Swedish dayli news magazine Norrbottens-Kuriren; all concerning a hunger strike that took place in Boden in the spring of 2013. The study’s approach is limited to the specific media event of the Boden strike, which according to media scoolar Nick Couldry is the place for a ritualization of journalistic practice such as objectivity. The event is chosen because of its duration, making possible a longer preiod of media coverage than what usual news stories on the conceptual immigrant most often holds. The media event is also taking place in a central part of the town of Boden, which also is a news value criteria (closeness), not often connected to the conceptual immigrant.

Method: With the methods of the critical discourse analysis (CDA), this study investigates significant tendencies in the reproduction on the journalist’s possible objectivity and dependence on inner and outer institutions is making this. Therefore, inter-discursive and inter-institutional relations and their linkage to the potential subject’s voice are made visible. Since neither the media consumer, nor the one to carry out the research can be expected to have been present during the interviews, only published material is analysed. According to the CDA method, the position of the subject depends on other subject’s positions, as well as on surrounding discourses in a bigger, sociocultural context. Therefore, the CDA method enables thematic, linguistic and contextual analyses of the selected material, which is of high scientific relevance for the specific study. The CDA also makes visible hidden and neutralised structures that are not always detected in quantitative studies. (Esaiasson et al, 2012:212-3).

Result: The 25 articles published between April 19 2013 July 3 2013 are all written because of the same event; the on-going hunger strike. The fact that no article on the subject is published thereafter shows the temporality of the result. All of the articles handles the notions of the hunger strike, and the different discourses; the one of the local citizen, the one of the journalist and the one of the Other, they all made visible the dependence on institutions. In three articles out of 25, the asylum seeker was enabled a subjects position where his/hers words were cited. Most often this person was described as a far distant group without sexes, names or opinions. At the samet time, the media event – the hunger – strike is discussed by surrounding institutions, politicains and citizens. Conclusion: The asylum seeker embodies the media event, but the subjects position and the voice is for others to take hold of. According to Nick Couldry, the media event is ambulant, why the possible future subject position of the asylum seeker wont be part of this event (Ibid 2003, s. 90). This is also made possible by the naming of “strikers”, that which is nothing after a strike. Therefor, the asylum seekers are to embody, but to be excluded from the news event, or to always be situated by the side if it’s border. Therefore, this study proposes reasons to, as Ylva Brune once did, (Brune 2004, s. 344) regard dependence on institutions and ritualised ideals of objectivity as part of the (re-)preoduction of the Other, where the asylum seeker serves as place for the news story, being telled by and for a ”we”, that is not him/her. Does or can even a media event include the Other, that is; the one without a subject’s position? Using the words of Trinh-t Min-ha (Chen, N. M, 2002), the closest the Other can get is to speak nearby.