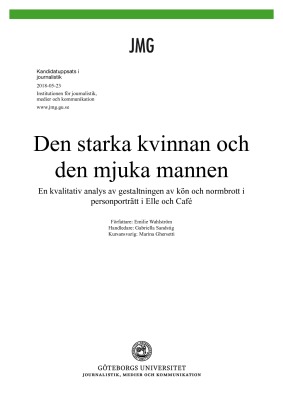 This bachelor thesis in journalism explores how gender and gender roles are being portrayed in profile interviews in the two Swedish lifestyle magazines Elle and Café. Elle is a magazine that is marketed towards women, and Café is a magazine marketed towards men. In every issue, there is a
profile interview portraying a famous person. These are the texts that are being analyzed.

The theories that the study is based upon are gender theory and framing theory. The gender theories that are used are theories about masculine and feminine stereotypes and theories about performance, the heterosexual matrix and subversive acts. With the method of qualitative textual analysis, this study explores how the person in the profile interview is portrayed and if there are any differences in portraiture based on the gender of the person. It also explores if there are any frames that reoccur throughout the texts and if there is anything outside of the gender norms or any subversive acts that are being portrayed.

The main results show that there are no subversive acts represented in the profile interviews. The results also show that the men often are portrayed as sensitive: they get to talk about subjects that are not commonly associated with interviews about men, and that the women often are portrayed as strong: they are described as confident and authoritative and they also get to voice their opinions about subjects such as feminism.