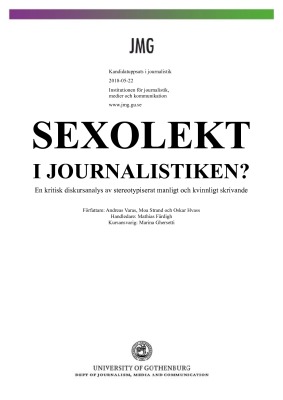 The aim of this study has been to evaluate how the extensive language research concerning masculine and feminine textual production in general applies to the less extensive researched
journalistically produced material. We also evaluated whether and how this derives from and applies to gender studies regarding men and women as socio-cultural structural beings, where men are seen as the norm and women porters to the norm – a gender contract.

Much of our work has evolved around the production of so-called hard and soft news, which historically and culturally are assigned masculine and feminine attributes; men are writing the hard news, in a hard way, and women are writing the soft news, in a soft way. Through a critical discourse analysis we applied specific extracts from the language research to articles
categorised as such, and compared the results to each other to see if it was applicable to the generalised theoretical view of male and female textual production.

One of the main results show that much of gender research made on general textual representation is not applicable to journalistically produced material. In contrast, we made other
findings such as how men and women adapt to different kinds of material and categories, where men adapt to the female way of writing when producing soft news, and women do not adapt to the male norm when producing hard news.

Interesting to note is, this shows that women are making a change to the gender contract by not making a change when entering the male area. That said, there might be variables that have a greater impact on the production of journalistic material than gender, such as professional procedures, technology, organisational issues, market conditions and cultural and political contexts. Whereas the only real conclusion we can draw from the results of our analysis in relation to our previous research and theory is that more angles are needed to understand how gender affects journalistic material than through classical gender lines.

This study is however important because it puts light upon the gender effects of journalistic products, and by locating possible differences and putting them in contrast to notions of
masculine and feminine writing, we provide the industry with the opportunity to reflect upon, and initiate, change. We also pave the way for further research in this area, to further understand the complexity that constitutes the contract between the sexes and how it evolves and constantly changes over time.