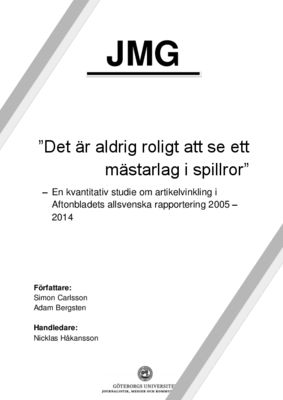 Swedish sports journalism are often criticized of giving too much attention to teams from big cities in general, and particularly to teams from Stockholm. It´s also a given in sports journalism that a good performance, like a victory in an import game, should result in some media attention. But what happens when these two criteria is opposed against each other? What is most important according to Swedish sports writers; the team from the big city or the winning team? We made a quantitative content analysis on the last ten seasons, 2005 – 2014, of the top Swedish football league, Allsvenskan. But our interest was not to examine every match; our analysis is based on every match where the big city team has lost to a smaller team. During these ten seasons 241 games were played where a smaller team wins against a big city team. We have studied Aftonbladets main article from all these games and, with help from certain theoretical tools, been deciding which team has got the main role in the article. We have been studying the headlines of the articles and which team that it is mainly referring to. Adding to this we’ve also been studying who is quoted in the entrance of the article. We have been analyzing the article picture to decide which team has the main role in it. We have also decided if the article is about one specific person or about the team. By comparing our results with older studies we can say that Aftonbladet gives losing big city teams much more attention than other losing teams. Almost more than half of the headlines focuses on the losing big city team. That number should be put in comparison to older studies saying that Aftonbladet focuses on the winning team in 79 per cent of the main articles. It seems that Aftonbladet thinks it´s at least as important to be a big city club as it is to win the game. We can also show that it´s more common that an article has a one-person-angle when it´s focused on the winning smaller team. It seems that a smaller team depends more on having big name players in their squad to get attention than big city teams have. Being located close to Aftonbladets office in Stockholm is a factor that seems to be important if you are a smaller team and wants attention. The teams that have the toughest time to get attention are located far from Stockholm. They have quite the same results during the last ten seasons as many teams closer to Stockholm but doesn´t get close to the same amount of attention. We can also show that a team that has been successful over a certain amount of time has a better chance of getting media attention, regardless where in Sweden they are located. It seems though that the smaller team has to have been successful in the later years. It doesn´t seem to be enough to have won the league two times in the last 20 years to get attention.