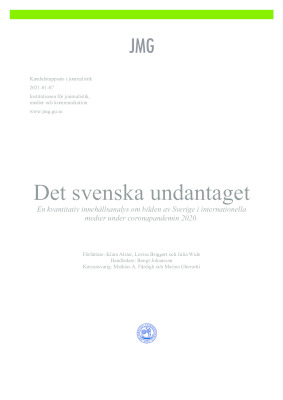 The aim of this study is to examine the international digital media image of Sweden during
the corona crisis of 2020. The purpose is to gain knowledge about how the corona pandemic
has affected the perception of Sweden and discuss in what way it could continue to affect the
country in the future. The study is carried out by investigating the four following research
questions: (1) Has the image of Sweden during the corona crisis 2020 been positive, negative
or balanced? (2) Which themes and key individuals are defined in the articles? (3) How does
the image of Sweden vary between the different countries? (4) Has the image changed or
further developed in pace as the pandemic progressed?

The approach taken in order to answer these research questions is a quantitative content
analysis of articles published in the United States, United Kingdom, Germany and France.
The articles used in this study are collected during the months of April and September in the
year 2020 and they are collected from The Swedish Institute’s selected articles concerning
the corona virus and Sweden. Throughout this study, a total of 392 articles were encoded
with the help of the framing theory created by Gaye Tuchman and further developed by
Robert M. Entman (1993). According to Entmans definition, frames are about the selection,
observance, definition and formulation of a problem. The variables were emanated by several
various themes, frames, stereotypes and key individuals.

With the four research questions in regard, a conclusion could be drawn that the image of
Sweden through this pandemic has been fragmented. The statistics show that most of the
articles were neutral. However, we were able to verify that a majority of the articles analyzed
in this study were negative. The majority of the articles focused on the Swedish strategy of
choice during the pandemic and they often depicted the Swedish citizens’ behavior and the
number of deaths caused by the coronavirus. The most frequently used frames had to do with
either conflict or responsibility, while the most narrated stereotype was that Swedish citizens
are law-abiding. Throughout the study, the Swedish prime minister Stefan Löfven and state
epidemiologist Anders Tegnell were the key individuals that were mentioned most
frequently.