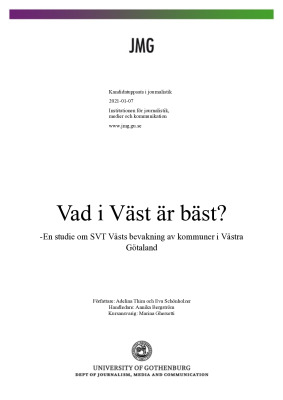 The aim of this thesis is to investigate how Sveriges Television, specifically Lokala Nyheter
Väst, is distributing its news between the 49 different municipalities in the Västra Götaland
county in terms of frequency, which subjects are covered in the news and how these subjects
are presented or framed.

The mission of Swedish public service is to have a broad supply of news that reflects the
entire country and all its municipalities. The mission includes, among other things, local and
regional news reporting. There is a general reduction in commercial local journalism around
the country, and this reduction of local media increases the responsibilities of public service.
Since 2014, Sveriges Television has been the only media to broadcast local and regional
television news, after the commercial TV4 discontinued its local and regional broadcasts.
This thesis explores whether or not Sveriges Television lives up to this mission, and the
increased responsibility.

To reach our result, we have employed theories on framing, news selection and news
evaluation. The method we have used is the quantitative content analysis. Our material is
collected from two synthetic weeks of Lokala Nyheter Väst’s TV broadcasts with 240 news
features in total. Rather than investigating the 49 municipalities individually, we have divided
them into groups based on population density and the number of residents who commute to a
larger city or municipality for work.

The result of our analysis shows that Gothenburg, which is the largest city in the county by
far, is portrayed in the media much more frequently than any other municipality. The news
regarding Gothenburg are also portraying a much broader variety of subjects compared to
other municipalities, or groups of municipalities. A conclusion can be drawn that the smaller
a municipality is, the more extraordinary the news have to be in order to appear in Lokala
Nyheter Väst’s broadcasts. There are also certain municipalities where all news are about one
subject, for instance crime, medicine or the environment. This leads to a potentially skewed
image of these municipalities, which can result in preconceptions and bias towards these 3 areas or cities. The result also shows that out of the 49 municipalities in Västra Götaland, three of them lack both local media within the municipality and representation in the material we investigated, hence being true so-called “white spots”, areas entirely lacking local media representation.