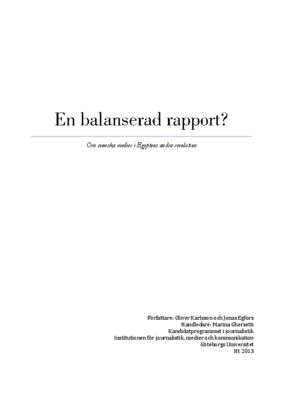 This bachelor thesis is a critical study in which we are studying if the swedish reports of the so called “second revolution” in Egypt have been objective. We have been studying this by using Jörgen Westerståhls objectivity model and we have chosen to investigate whether the reports have been objective balance-wise. The second revolution is a term which describes the protests and demonstrations that led to the military action in which the elected president Muhammad Mursi were forced to resign on the 4th of July, 2013 The study includes articles from five leading Swedish newspapers, Aftonbladet, Dagens Nyheter, Expressen, Göteborgs-Posten and Svenska Dagbladet. We have been studying all the articles that include the word “Egypt”. We have been studying how the different participants have been treated by the news media by looking at how many times they get to speak for themselves and how many times they have been mentioned by others and in which way they were mentioned, with praise or criticism. The participants we have defined and studied are the Muslim Brotherhood, the military and the different groups and organizations we have chosen to call the “opposition”. We have also studied where the articles take place to determine whether the reports have been geographically balanced and what the articles is about to see if the reports have been concentrated around the conflict or if it focuses on other topics. We have been studying articles that were published between the 17th of June until the 21st of July, 2013. Two weeks before Mursis resignment, the week of the resignment and two weeks after. Our results show that the reports have been unbalanced in how the different participants are treated in the news media and we have come to the conclusion that they are not objective balance-wise. The military forces are mentioned in a large amount of the articles but they seldom get to speak for themselves. The Muslim Brotherhood and the opposition get to talk about the same amount of times but there is a difference in how they are mentioned. The Brotherhood is more criticized while the opposition is mentioned slightly more positive or neutral. Our results also show that a very large amount of the articles take place in the capital city Cairo. Some articles are about Egypt as a nation but there were very few articles that took place in another town or place than Cairo.