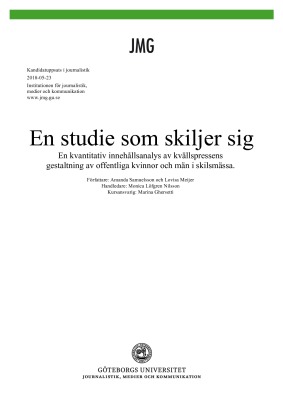 The purpose of this study is to examine the media portrayal of public couples going through adivorce. The examined newspapers are the Swedish tabloids Aftonbladet and Expressen. The used method is a quantitative content analysis, in which we have analyzed 221 articles, all regarding a public couples divorce. All of the selected six couples are heterosexual, since our study is based on the heterosexual norm.

We have examined how much space the woman and the man receive, who gets the most quotes and whether the man or woman is mentioned the most times. We have also examined
the gender of the journalist, to see if that makes any difference in the portrayal according to the different genders. These aspects of our study are connected to the theory of framing.

We have also examined who talks the most about their children, who gets mentioned connected to their work and who talks about appearance. Also who is portrayed as
emotionally weak, strong and neutral. These aspects of our study is connected to Yvonne Hirdman’s theory about the gender contract.

Our results has shown that the woman gets more space in the articles. It is also clear that the man does not get that much space we thought he would, according to theory. The man is
more often neutral, meaning that he does not show as much emotion as the woman. It is more common that the women talks about children. We also noticed that the journalists gender has no impact on the portrayal of the different genders.

In conclusion we mean that our study both confirm and contradict the stereotypes we wanted to investigate. Some, as the one with the women being the one who talks the most about children, is strengthened by theory. Some, as the man being the strong one, is not.