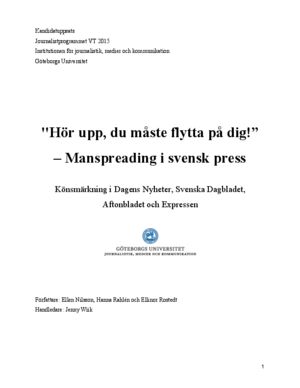 To investigate how men and women are represented in nationwide newspapers, we implemented a study focusing on gender typing in news content and in the newsroom. Gender typing is a theory that can be used for investigating how certain duties or news subjects are assiged to a journalist of a certain gender based on stereotypes. We also investigated gender typing in the news content, i.e. which roles are assigned to which gender. Several media companies worked actively for gender equality in their newsrooms but with the digitalisation of media that eventually led to staff cuts and reorganization, equality of men and women were no longer a priority. Previous research testifies to a widespread gender typing in both swedish and international media. There has been research of gender typing done for instance in tv-news or in specific areas such as sports or crime. With this study we will contribute to new results based on a specific type of news, nation news. The purpose of the study includes to investigate the extent of gender typing in nation news published in nationwide newspapers; Dagens Nyheter, Svenska Dagbladet, Aftonbladet and Expressen. We also wanted to see what roles men and women were given in the articles and which subject those articles affected. We were curious to see if there were a difference in articles written by men or women regarding gender representation of the contributors. We also took the size of the articles and photos into consideration. We implemented our questions into variables and performed a quantitative content analysis on a total of 993 articles. First of all the results shows us that the national news material in the newspapers are dominated by male journalists even though research shows that there are 50 percent women amongst swedish journalists. Our results points to widespread gender typing both regarding journalists being assigned to write certain news based on their gender and regaring what roles men and women have as participants in the articles, within specific subjects. The conclusion of our results concentrates on comprehensive organisational problems where stereotypes are reproduced and outdated sturctures proceeds to influence the production of news.