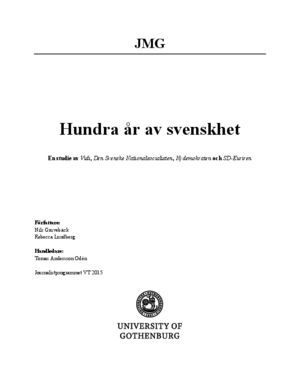 Bachelor’s Thesis in Journalism Title: One Hundred Years of Swedishness. A Study of Vidi, Den Svenske Nationalsocialisten, Nydemokraten and SD-kuriren Authors: Nils Gruvebäck and Rebecca Lundberg Academic term and year: Spring term 2015 Department: Journalism, Media and Communication Supervisor: Tomas Andersson Odén Examiner: Mathias A. Färdigh During the last two decades nationalist movements have mobilized throughout Europe. In Sweden the growing party is called the Sweden Democrats. During these years they have been accused of having a racist agenda, but since 2005 when Jimmy Åkesson became leader of the party, they have changed their logotype from a burning torch to a blue and yellow hepatica, their popularity has grown and they have tried to dissociate themselves from their rightwing past. The purpose of this thesis is to investigate how nationalist movements in Sweden have developed during the last one hundred years. By starting with Vidi, an antisemitic newspaper from 1914, moving through the 1930’s and the Nazi party National Socialist Worker’s Party, to 1994 and the populist party New Democrats and the Sweden Democrats 2014 we want to see how these parties differ from one another – and what they have in common. By using the ECA-method (Ethnographic Content Analysis) we are exploring how swedishness is portrayed and constructed in four nationalist magazines associated to these movements: Vidi, Den Svenske Nationalsocialisten, Nydemokraten and SD-kuriren. Through a postcolonial perspective we investigate how the idea of Swedishness changes throughout the years, in relation to how the idea of the other changes. We see how the idea of Swedishness is created by how the other is portrayed, and how the two are in one way symbiotic and get meaning from one another. We also examine how media is portrayed in these magazines. In a Swedish nationalist discourse it is not unusual to accuse media for censorship, lies and “Swedish hostility”. As this study will show, the idea of Swedish hostility was vital already in 1914.