A Critical Discourse Analysis of Marketing
Material and their Sociotechnical
Imaginaries 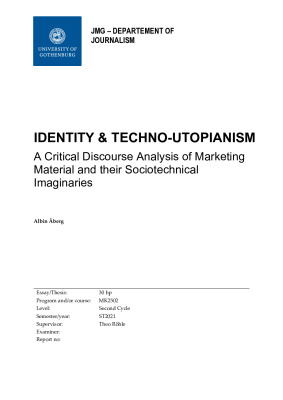 This research paper sets out to investigate the messaging present in a corpus of texts
gathered from Acxiom’s, an American data-analysis and ‘Identity Solutions’-company,
website. The paper applies a framework of Critical Discourse Analysis informed by Theo van
Leeuwen’s theory of ‘legitimations’ and analyses the findings through the theoretical
framework of ‘Sociotechnical Imaginaries’. Greater emphasis is placed on the theoretical
framework, in the hopes of allowing a greater insight into the ideological underpinnings of
the corpus. The paper looks at five broad categories of inductively identified discourses in
the texts; the neo-liberal market economy, privacy, identity structure, techno-utopianism,
and the naming conventions/usage of biological terms carried out by Acxiom.
This is undertaken with the aim of answering the question: ‘What discourses are present
in the texts, and to what extent do they extol the virtues of techno-utopianism?’ After the
empirical analysis, the project will pivot to focus especially on the underlying techno-utopian
elements and discursive positions which Acxiom assume in the texts. The analysis will be
focusing on the techno-utopian elements, and Acxiom’s own conception of identity, as it
exists both inside and outside of its system, to show how the texts analysed contain a great
starting point for attempting to trace an outline of the imaginary disseminated through
Acxiom’s system.
Additionally, through engaging in a legitimation-based critical discourse analysis, this
study aims to examine the power structures implicit in the texts. It diagnoses how Acxiom constructs not only their own position, but also that of their clients, and the consumers which
are categorised in said system. Through doing so, the project looks at the role of a dataanalysis
company working largely unseen in today’s data-driven landscape of marketing
and communication in order to ensure that corporate communications remain targeted and
relevant at the potential cost of reifying and maintain prior power relations in society.
Additionally, the project looks at the imaginary, the vision of a preferable future, constructed
by Acxiom and critically analyses how it contains elements that misinterprets the role and
function of ‘identity’ and reshapes it into an algorithmic abstraction, away from its roots in
individuals’ ‘real’ lived lives. Through activating the idea of said ‘imaginary’ the project
shows how futures that are envisioned run the risk of being subsumed into the technology of
those that control it.
Therefore, the project will through an empirical element, draw out the theoretical and
ideological underpinnings of a major actor in the sphere of data-analysis and identity
solutions.