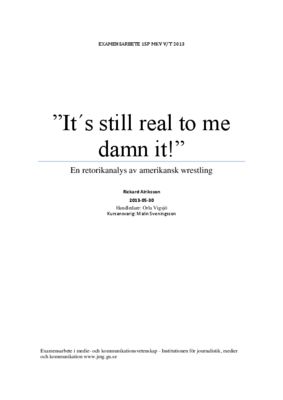 Professional wrestling has been around for over a hundred years. Its origin can be traced back to immigrants in the 1800´s whos collar and elbow style of wrestling became popular. Soon it found its ways into the carnivals traveling the country and there it became the wrestling that we know today. Two men, screaming and bragging how good and strong they are, trying to convince its audience that it shall pay to see the fight. The purpose of this essay is to look at two of wrestling’s biggest names in Hulk Hogan and Ric Flair from a rhetorical standpoint and see what they do to convince their audience to buy their matches. The basics of rhetoric can be used to analyze speeches using the terms ethos, pathos and logos. The two wrestlers analyzed where known for their good and engaging speeches, in wrestling their called promos, and their different personas made them interesting to analyze. Hulk Hogan was known to be the good guy, the all-american who trained, said his prayers and ate his vitamins and cared for kids and other people in general. Ric Flair was known to cheat in the ring to get his victories. He always dressed in suits and bragged about woman, fast cars and how good he was in the ring. The results show that Hulk Hogan used the entire spectra of basic rhetoric. He would build his ethos by talking in terms that he represented, not only himself but the whole audience. He used pathos the get audience to feel fear for something that he said he would fight by represent the audience. Ric Flair mainly used pathos and the feeling of hatred. A hatred directed at himself by himself that would hopefully upset the audience to a degree where they would pay to see the match he was promoting.