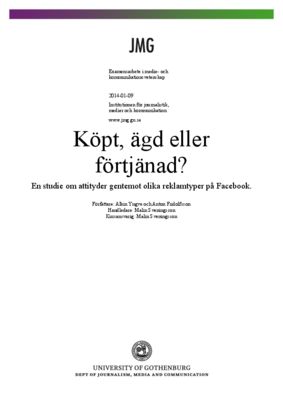 In todays media landscape, corporations and advertisers need to find new ways to attract the attention of consumers. The rise of social media in general, and Facebook in particular, has led to a wide array of new marketing opportunities. Advertising today is a broader concept than ever before, and is constantly evolving into new shapes. This applies in particular to the advertising that occurs in social media. Therefore a broader approach to the original concept of advertising is necessary, one who takes on more aspects of corporate communication. In modern marketing, marketers often distinguish between paid, earned, and owned media. This study aims to explore how two different generations of Facebook users (born in the 60’s and 90’s respectively) perceive these three kinds of advertising methods in their social media experience. Are any of the different kinds perceived more positively than another? The study also aims to explore users perceptions of targeting, matters of integrity and the boundaries for advertising on social media. In order to collect empirical data for our study, we held two qualitative focus group interviews. The results show that the surveyed respondents do not believe that advertising on Facebook is annoying to the extent that it ruins the user experience. The most positively perceived type of advertising is earned media. The most negatively perceived type of advertising is the paid media that is placed amongst user generated content – thus interfering with the purpose of usage. These perceptions are generally equivalent in both surveyed generations. Respondents’ views on targeted marketing efforts are somewhat divided. From a privacy perspective, respondents born in the 1960’s are somewhat more reluctant to targeting than the respondents born in the 1990’s. Both groups believe that targeted advertising can be both a rewarding and relevant feature of their Facebook-experience, provided that it is tailored to target groups and well aimed. Respondents believe that is should be clearly stated whether, if or when Facebook