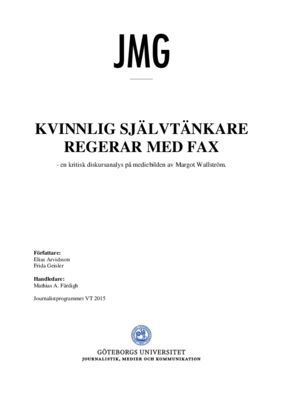 In this study we have looked at medias portrayal of Margot Wallström with the ambition to explore how female polititicans are portrayed in Swedish media. We have done this by a critical discourse analysis on articles from the two biggest daily- and evening papers in Sweden, with a total of 16 articles. We have stood upon the theoretical foundation consisting of gender research, media effects research and discourse research. The gender research has given us explanations and manifestations of the difference between the media portrayal of men and women. The research on media effects has been our way to firmly establish the relevance of our study in a societal perspective. And lastly, the research on discourses has given us the understanding and the tools to go through with our study. To ascertain how gender is portrayed, in the portrayal of Margot Wallström in Swedish media, we developed three analytic themes to apply on our material. Those themes are The Mans Favorite, which focuses on Margot Wallströms private and professional relationships, The Female Self-Thinker, which focuses on her role as a politician, and Politician and Mother, which focuses on her role as a mother. We found that Margot Wallström through her career as a politician has travelled from the role as a mother to the role of a politician. Her family and the matters of her private life has been all over the Swedish press over the years, and her personality has been a big part of the description of her as a politician. Although she is not explicitly mentiones as a female politician more than a few times, she is indeed seen as a woman in politics.