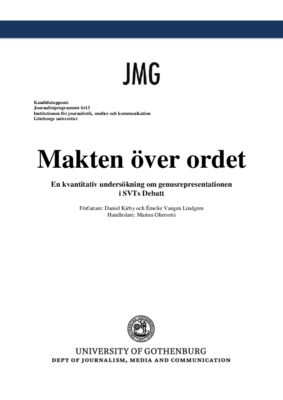 Authors: Daniel Kirby & Émelie Vangen Lindgren Title: Controlling the Word Level: Bachelor of Journalism Location: University of Gothenburg Language: Swedish Number of pages: 29 The largest arena for public debate in Sweden is the television show Debatt, airing every week on SVT: Sweden’s public service network. Every episode has an audience at around 500.000 viewers. Because the channel is under the rules of the public service agreement, strict rules of diversity are applied. The purpose of this study is to examine the gender representation in Debatt; to investigate how men and women behave in the context of the televised debate and to see if the programme has managed to reflect an equal representation of the voices of men and women. We did this by performing a quantitative content analysis of four different episodes of Debatt, with 4 different hosts – two women hosts and two men. The episodes were randomly selected from the complete run time of Debatt, with the first episode from the first host dating back to 2001, and the latest episode from 2013. By doing this, we wanted to investigate exactly how often and for how long men and women were allowed to speak; how often they were interrupted and what subjects they discussed. We analyzed a total of 1021 units and found that men spoke almost twice the amount of time that women spoke. And when the women were allowed to speak they spoke as a person affected by an issue, or about subjects connected to the private sphere; such as the welfare of children exposed by the media. Men on the other hand totally dominated subjects connected to the public sphere; such as politics and surveillance. On average, men and women both spoke for 14 seconds every time it was their turn to speak. And opposed to our original hypothesis, men were interrupted more often than women. The conclusions of our study show that men do occupy a larger space in the televised public debate than women, but that the differences in their respective methods of debate are minimal, and that the divide between the genders is largely based on editorial decisions, rather than the behavior of the debating crowd.