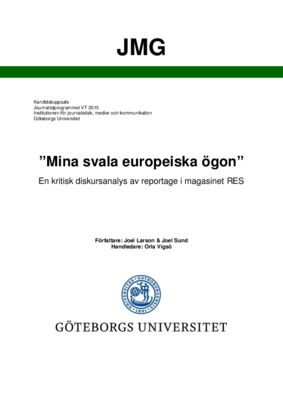 Title: ”Mina svala europeiska ögon” – En kritisk diskursanalys av reportage i magasinet RES Authors: Joel Larsson och Joel Sund Subject: Undergraduate research paper in journalism studies, Dept. of journalism, media and communication (JMG) Gothenburg University Term: Spring 2015 Supervisor: Orla Vigsö, JMG, Gothenburg University Pages/words: 58 pages/21 378 words (excluding appendix) Purpose: The main purpose was to examine what image the travel magazine RES presents of the world outside of the western world, whether it is based on exotifying stereotypes and how that correlates with the responsibilities and ethics of journalism. Method: Qualitative text analysis using critical discourse analysis with a postcolonial perspective. Results: The results show that the travel magazine RES describes a variety of subjects but a pattern is visible when how they describe them is analyzed. In nearly all of the selected articles both places and people were subjected to exotifying stereotypes to some extent. Through postcolonial theory and close reading, we discovered power structures embedded in the discourse. The four biggest patterns made visible were summed up in four different themes. Positivity, perspectives on reality, eurocentrism and “the Other”. Positivism was what dominated almost all of the analyzed articles. Nearly everything in the articles, places, experiences and people, were described in a positive light. This presented a one-sided picture of the world outside of the Western world. Perspectives on reality mean (in this case) who had the power and opportunity to create the “reality”. In the articles it was obvious that this power belonged to the journalist, as opposed to the inhabitants of the visited country. The results also showed a Eurocentric picture of the world presented in the articles. The eurocentrism was observed in many comparisons between the places visited in the articles and the Western world. The last of the four was how the journalists created “the Other” by exotifying people and places, making them seem different, weird, fantastic or just something that the Western world is not. All of this correlates poorly with the responsibilities and ideals of journalism. Traveling journalism cannot be judged by the same standards that news journalism can, however, this dissertation has shown that travel journalism indeed has the power to produce and reproduce exotifying stereotypes.