the discourses of marketized nonprofit fundraising 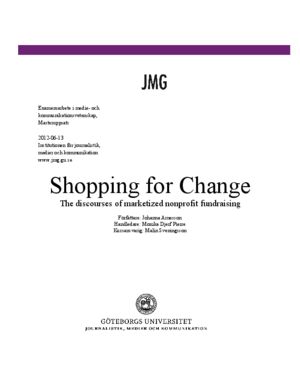 This thesis examines the articulation of marketized philanthropy within the discourse of nonprofit fundraising. The objective is to find out how fundraising works as a discursive practice – how is the world constructed, who and whom are participants in this world, and why should the presumed donor get involved? It does so from a critical approach, connecting the business of fundraising to theories of subpolitics, individualization, consumer power, and the argument that market logics serves a depoliticizing function within this context. The research is done by analyzing the fundraising communication of six major nonprofit organizations in Sweden, working both with national as well as international efforts, through their respective official website. This is done through a discourse analytic approach, initially concentrating on the texts of the websites as communicative events and analyzing them from a predestined set of analytical questions. The analysis is then developed further, on the level of the order of discourse, in four separate but intertwining themes derived from the initial result. The research shows that market logics and language is prominent in the organizational communication, both as discourse of efficiency and individual responsibility, as well as as technique for fundraising. Fundraising efforts and messages are mainly configured around international aid and recipients, as opposed to the national social services that some of the organizations provide. In this context, lack of resources is defined as the root of the problem, but this lack is often referred to in a circle-reasoning fashion where one lack is both the cause and the result of another. The act of giving, or donating, is predominantly constructed as a form of transaction, where the donor buys a commodified version of the idea or efforts of the organization. In this way, the donation becomes a form of political consumerism that situates the donor in a role as a consumer rather than citizen. Freedom of choice and simplicity are traits that are highlighted and promoted in this context. The thesis argues that this development, even though it entails positive re-thinking about agency and power of ‘those in need’, contains problematic aspects when it comes to the way political power relations are constructed. Where individualization serves as a detaching force between participants, and political participation is constructed in such a way that it takes the form of shopping for change, it is hard to find room for perspectives and voices that question the structural problems of capitalist society.