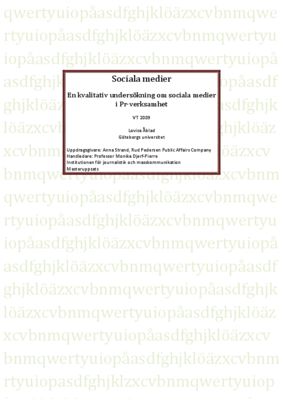 This thesis was written by order of Rud Pedersen Public Affairs Company, a PR- consultancy firm located in Gothenburg. The assignment was to investigate social media in Pr- activities. The thesis is formed by three main categories: _ What is social media? _ Who are using social media? _ How can you use social media in public relations? The information which is being presented in this thesis is based on academic reports, interviews and research on social media blogs and lectures. It is a qualitative approach since the purpose is to get a deeper understanding for the subject in question. Since the principal is especially focusing on political Pr, there are several parts of this thesis which analyses social media in politics. However, most of the analyses are focused on marketing because there is a larger amount of information concerning social media in marketing PR. All through the thesis there is a comparison between Sweden and the United States since social media is well-developed both within American politics and Pr- activities. Summary of findings Social media is the collective name of a number of conversation -focused services on the web such as blogs, social networks and communities. When it comes to field of application, most users use social media for personal reasons but professional networking through social media is becoming more common, especially among men in the ages of 25-40 during the peak of their careers. Women do more frequently visit and use blogs and social networks for personal reasons, and is the dominating group of bloggers in Sweden. When using social media for both political and marketing purposes, one has to be aware of the transparency of social media as well as understanding that social media is not yet another channel for commercials. What social media is all about is basically: _ Dialogue between producer and consumer _ Personal in tone _ The producer is no longer in complete control of his/her published information Companies who have succeeded in their social media marketing have understood the importance of having a personal and honest conversation with their customers. Social media is a long-term relationship building and companies with highly engaged customers are most likely to succeed with social media. Keywords: social media, marketing, politics, PR