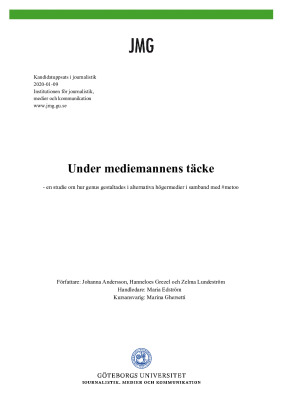 The research aim of this thesis is to describe how the #metoo movement and its actors are portrayed in the alternative right wing media sphere, focusing on the portrayals of gender. We have formulated our research questions as follows:

1. What has the reporting of #metoo looked like in alternative media?
2. How has gender been portrayed in right-wing media in connection with the #metoo reporting?

This thesis uses qualitative method, critical discourse analysis to conduct the study. We have chosen 124 articles from the four most prominent alternative publications in Sweden. We first identified all articles covering #metoo in alternative media during the period 15th of October 2017 until the 15th of October 2019. After sorting out irrelevant articles for our study, 124 remained. We used Berglez blueprint intended for this method.

The most important findings are the prevalence of media criticism in these articles, and the way this trumps all other themes in the text. We also found a number of cases of stereotyping of women and men, and categorized these into multiple “themes”. The most prominent of these is the “Man in media” which is a powerful man in media that is described as worthy of being taken down through accusations of sexual assault within our analyzed material. The majority of our analyzed material portrays women as part of larger groups, most notably the #metoo-movement itself. Women rarely get to represent themselves, and a number of known sexist stereotypes also prevail in the texts. We also found quite a few texts reimagining the narrative around sexual assault as one centered around immigration, specifically critique of recent immigration, putting the blame for increases in rape statistics on immigrants.