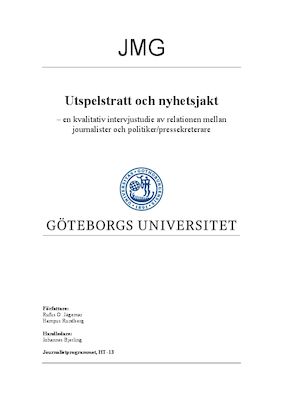 In this study we have explored and investigated how journalist experience the relationship with politicians/press secretaries in the making of political news. The study examines how journalists see the balance of power between them and their political sources in the setting of the news agenda. To do this we have used a qualitative interview analysis. Our theoretical starting points have been based on the social exchange model. The social exchange model has a social psychological and sociological perspective that explains the interaction, social exchange and stability as a process of negotiation exchanges between parties and operators. Social exchange theory posits that human relationship and interaction are formed by the use of a subjective cost-benefit analysis and the comparison of alternatives. On the other hand this model only describes the exchange as rational. To really understand the exchange and power of balance between the parties we had to incorporate factors and theoretical standing points regarding norms, ideal, cultures and organizational structures in our analysis and study. We also had to incorporate the changing strategies of the political actors and how those strategies influence the journalist’s in their daily work. The last factors of analysis we used are based on the changing of the journalistic content and the emergence of analysis and commentating as journalistic tools. Our outset has been that the relationship between politicians/press secretaries and journalist are symbiotic and that the power of balance is changing. We used four themes of analysis to analyze the journalist’s experience of their relationship with politicians/press secretaries in the setting of the news agenda:

1. The exchange between the parties (exchange model)

3. The professionalization of politics and actions of the political secretaries

4. The ever §changing future of political journalism and the emergence of new media channels and analysis and commentating the content of journalism.