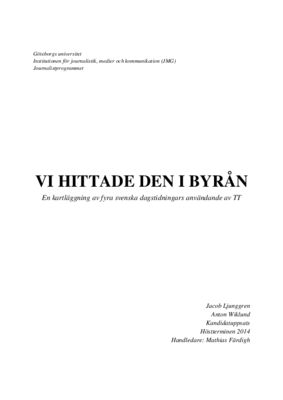 The purpose of the study was firstly to describe the use of news articles from the largest Swedish news agency, TT Nyhetsbyrån, in four Swedish newspapers. Secondly, the purpose was to see if there was a homogenization of which TT-articles that was used. This was carried out by examining articles on the newspapers’ local, domestic and foreign pages. The newspapers that was chosen were Aftonbladet, Dagens Nyheter, Göteborgs-Posten and Nerikes Allehanda. They were chosen due to their size and their coverage area. This was because of a hypothesis that larger newspapers in general have more resources and should therefore not be as dependent on material from news agencies. As for the coverage area, the chosen newspapers were divided into two local and two nationwide, to be easier to compare in those categories. The theoretical premises for the study was first and foremost the normative demands of journalism in a democracy and were based on the theories regarding information value, brought forth by Kent Asp, as well as other theories regarding normative demands. Previous research in the area is somewhat frugal even though there are quite a few previous studies that have examined TT. The study was a quantitative content analysis carried out through a template by own construction. The four chosen newspapers were analyzed between 14-18 October 2013. These dates were determined by a pilot study where Aftonbladet and Dagens Nyheter had been analyzed throughout the year 2013. The conclusion drawn from the pilot study was that the medium number of TT-articles in the newspapers appeared in October, which is why those dates were chosen. The results of the study showed that 41 percent of the analyzed articles were produced by TT, while 56 percent was produced by the newspaper itself. 3 percent of the articles had no byline. However, on the local pages, the amount of articles from TT was only 9 percent, while the amount on the domestic and foreign pages were 53 and 49 percent. When it comes to the homogenization of articles, it was shown that out of 189 separate TTarticles, 4 occurred in three of the newspapers, 43 occurred in two of the newspapers and the remaining 142 TT-articles were found in one of the newspapers. In conclusion, the study showed that by the study itself it is impossible to determine whether or not the normative demands of journalism were upheld by the newspapers use of TT-material. This was to some extent due to the possibility of different interpretations of the results.