WHEN FAKE NEWS MAKES THE NEWS

A study of journalistic boundaries 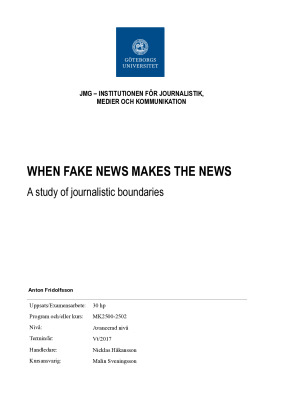 This thesis takes a spearheaded look at a modern, much-talked about concept of misleading information known as ”fake news”, and how traditional journalists have handled its emergence with regards to their professional boundaries. Built on the premise that who and what is to be considered
journalism is a constant battle continuously fought between professional journalists and actors trying
to lay claim to their professional territory, through the use of qualitative ethnographic content
analysis of 88 journalistic texts, the study’s aim is to take initiative in academic concept development of how to define fake news, and explore in what ways traditional journalists have defended their professional boundaries, in light of the threat provided by the increasing prevalence
of misleading content in the information ecosystem, as well as by an anti-establishment, critical-oftraditonal-media post-truth culture.
Fake news is identified and defined as a microcosm of concepts containing one type of ’pure’ fake
news content, and four other types of misleading content. The textual analysis on boundary work
reveals an offensive stance where, in line with previous research, fake news and post-truth culture is expelled from the boundaries of journalism as deviant information-actors who pose a threat to
liberal, western-style democracy. At the same time, using different rhetorical techniques, traditional
journalism and it’s practices are reaffirmed to their audience as the proper alternative of gathering and presenting information, as well as a prerequisite for a healthy democracy.
Put in a context of the future of news, the thesis argues that the results indicate a possibility that fake news and post-truth culture might act as a ”fifth estate”, keeping traditional media in check, as they feel the need to eschew sensationalism and gossip for quality journalism to keep themselves
separated from fake news and other post-truth content.