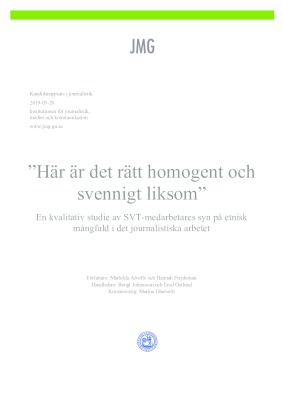 Theoretical framework:​ The methodology used to analyse the results of our study is rooted in the framework of ethnocentrism, the representation theory, postcolonialism, orientalism, the agenda-setting theory and the theory of “we and them” in media.

Method:​ In accordance with the overall aim of the thesis, a qualitative research method was adopted. In-depth interviews were conducted on thirteen co-workers at three different Swedish television newsrooms across the nation and covered reporters, editors and editors-in-chief respectively.

The results of the study suggest that two-thirds of the newsrooms had a very limited representation of ethnicities among their staff – the most predominant are ethnic Swedes. One particular newsroom, however, showed a greater level of ethnic diversity. Nonetheless, they were very much dependent on interns to reach their desired level of ethnic representation at work. Furthermore, the interviewees unanimously agreed that ethnic diversity in the newsroom is paramount to the understanding and representation of their respective audiences. It enables a wide array of people to better resonate and relate to the content covered in the news. Moreover, the analyses suggest that recruiting staff solely based on the intentions of creating an ethnically diverse environment was not a top priority. The composition of employees at the editorials in terms of ethnicity had a significant impact on the selection of news. This was particularly evident in the interview sessions were the reporters explained that they are usually given authority regarding the decision of what content is to be covered. Thus, they argued that their choices are somewhat influenced by their background, upbringing, culture and personal experiences. Ultimately, the interviewees agreed that the composition of employees at the editorials did have an effect on the content covered and the audience in terms of identification, representation, and whether or not stereotypes were being amplified.