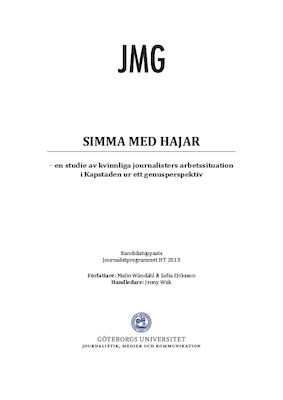 Authors: Sofia Eriksson and Malin Wändahl Title: To swim with sharks -­‐ a qualitative study of female journalists work situation in Cape Town due to gender Level: Bachelor of Journalism. Autumn 2013 Location: University of Gothenburg Although the distribution of sex in the South African media houses is equal, research shows that the work conditions for women and men are unequal. Therefore, we have studied how the situation looks like beyond the statistics. The aim of our thesis is to examine, due to gender, how female journalists in Cape Town experience and cope with their work situation in a profession traditionally dominated by men. To achieve the purpose we had a qualitative approach with interview as method. We interviewed six female journalists at newspaper houses in Cape Town. In the analysis we applied the concepts of journalistic field, doxa, journalistic culture as well as strategies and tactics to get a further understanding of the collected material. We have found that journalists’ work conditions, which are deeply influenced by gender, are determined by unequal structures created for men. In contrast to statistics, there are more female journalists than male journalists in the newspaper rooms in Cape Town. The journalists experience a lot of stress in their profession, due to a heavy workload and understaffed newsrooms and due to expectations of overtime and the need to produce many articles per day. Newsrooms in Cape Town are characterized by structures that are designed for men, which make it impossible for female journalist with children to advance in any significant way. The work conditions make it difficult to combine work and family since women are expected to be responsible for children and household. The journalists perceive sexism in the field, both at the office and in interview situations, and to handle it they reduce and deny the truth of its impact. The doxa, which contains values and norms that are perceived as the truth by the journalists in the field, emphasize masculine values and the man is the invisible baseline. The doxa is reproduced by the journalists themselves but also by the managers in the media house who does not provide entry for ”girly-­‐girls”. In order to handle the very stressful work situation the journalists give their role as a journalist a higher value, in order to justify the sacrifices they have to make. Their personal life is strongly affected negatively by their work situation. As a result, half of the journalists in the study do not see a future in journalism.